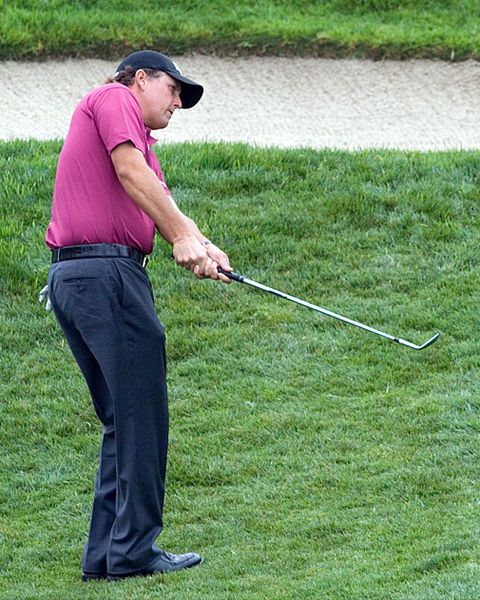 Professional golfer Phil Mickelson hasn't had much luck while playing at Pebble Beach this weekend.

In one of his most embarrassing moments, televised for all the world to see and see again on internet video reruns, Mickelson is seen landing squarely on his rear end while searching for his errant ball.

When his drive on 18 landed to the left of the 18th fairway on the rocky beach, Mickelson began searching for it and promply landed on his butt.

Luckily, he caught himself with both hands and managed to get up quickly, continuing his search on the craggy beachfront.

The area where Phil took his embarrassing tumble seemed to contain a mixture of slippery wet sand and grass.

Mickelson, who won the Pebble Beach Pro-Am Tournament last year, may yet have the last laugh. He heads into Sunday's play being 1 under par and may still claim the 2013 winner's trophy.

Mickelson is the defending champion in this tournament, which he has won four times.

Phil Mickelson Falls Down At Pebble Beach While Hunting For Ball [Video]
http://www.inquisitr.com/517223/phil-mickelson-falls-down-at-pebble-beach-while-hunting-for-ball-video/