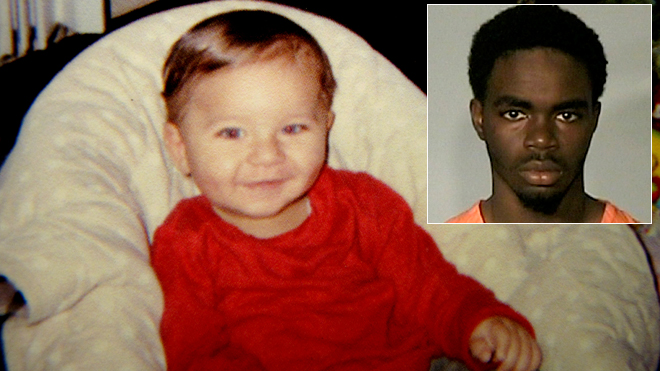 Baby Shot In Stroller: This photo provided Friday, March 22, 2013 by Sherry West, of Brunswick, Ga., shows her son Antonio Santiago celebrating his first Christmas in December of 2012. West says a teenager trying to rob her at gunpoint Thursday asked "Do you want me to kill your baby?" before he fatally shot 13-month-old Antonio in the head. West was walking with Antonio in his stroller near their home in coastal Brunswick. The mother was shot in the leg and says another bullet grazed her ear. Police are combing school records and canvassing neighborhoods as they search for the gunman and a young accomplice a day after the slaying Thursday. (/Courtesy of Sherry West)[/caption]Defense Lawyer 'Absolutely' Certain of His Clients Innocence is Baby Murder Charge

The defense attorney for seventeen-year-old De'Marquise Elkins is unequivocal in his belief in his client's innocence. In an interview with the Associated Press, Attorney Kevin Gough made the following statement: "My client is absolutely, 1,000-percent not guilty."

According to FOX News, Gough made the statement as he was about to enter the courtroom to defend his client. Later in the day, Elkins made entered the courtroom dressed in an orange jump suit, the color Georgia inmates are made to wear when charged with violent crimes. Elkins has been charged with murder in the death of a thirteen-month baby Antonio Santiago. He is charged with firing off a weapon which struck the boy while he was being strolled about by his mother.

The woman, Sherry West, received a non-life threatening gunshot wound. According to Mrs. West, she was minding her own business while strolling her child when she was approached by two teenagers and an argument ensued. It was at that time when Elkins is alleged to have opened fire on the mother and son wounding her in the leg and shooting the toddler in the face.

Elkins is a high school dropout who quit attending an alternative school in the autumn of 2011. His attorney will be motioning for a speedy trial.

'We look forward to our day in court,' he said.

Ms West recounted the attack this weekend. She said: 'He asked me for money and I said I didn't have it.

When you have a baby, you spend all your money on babies. They're expensive. And he kept asking and I just said "I don't have it." And he said, "Do you want me to kill your baby?" And I said,

'I'm always going to wonder what his first word would be,' West said.

Related Topics:Baby Shot In Stroller
Up Next