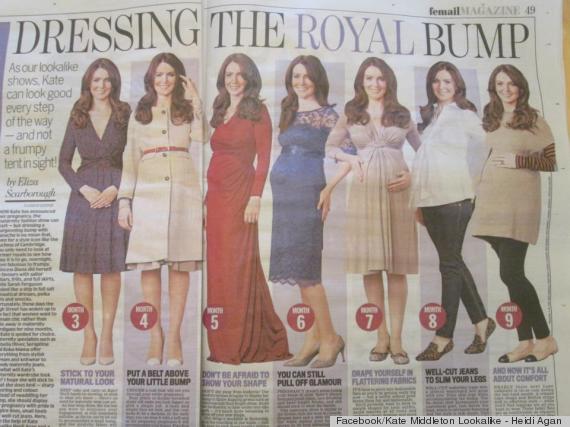 A Kate Middleton impersonator has taken on a fake baby bump in order to keep up with the changing figure of the Dutchess. Heidi Agan, 32, stated to the BBC, "As Kate grows, I will too. To be authentic, I thought it was important."

“It’s just something I never thought would happen to me but has turned out to be the most wonderful thing ever,” said Agan, who studies everything from Middleton’s wardrobe to her habits and even her posture.

According to the Huffington Post, Agan found her calling 10 months ago when customers commented on much she resembles Middleton. She left her job and fully committed herself to appearing in public with the same outfits and accessories favored by Middleton. Agan's fame grew after an October 2012 appearance on Good Morning America.

Agan's fans learned of the baby bump addition through a post on her Facebook page. She also participated in a Daily Mail photo spread where she posed as Middleton at different stages of pregnancy.

The photos showed Agan modeling several stylish maternity outfits. She admits the clothes were a matter of guesswork. "It is difficult at the moment as she's not big enough yet to change her entire wardrobe, so it is difficult to see how she's going to dress it," she said.

Agan's salary has increased substantially since taking on her doppelganger duties, allowing her to make it rain when she needs to in order to match Middleton's chic style. "The most expensive shoes I've bought as Kate were about £200, the dress was about £300 - which I don't think is that bad considering her original evening wedding dress by Alexander McQueen would have cost ten of thousands of pounds," Agan said, adding that, "I have to get the clothes, the mannerisms, the way she stands and interacts with William right. Things like that are all very important if I want to be the best."

While Agan does have critics, mainly people who do not see a clear resemblence, she is having fun pretending to be Middleton.

baby shot in stroller: “My client is absolutely, 1,000-percent not guilty.”