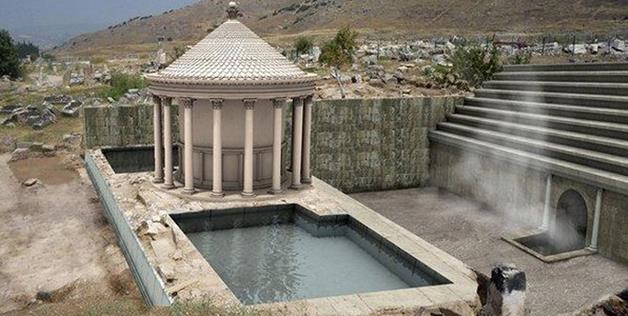 Pamukkale, Turkey - archaeologist have found the mythical "Gate to Hell" in this small Greek town. No, they are not speaking of any Biblical site but rather the mythical portal to the underworld spoken of in Greek mythology as "Plutonium".

This small town was anciently known as Hierapolis and was part of the kingdom of Phrygia.

The ancient Greek geographer Strabo documented the cave saying that thick vapors emanated from it making visibility extremely difficult. Strabo said the cave's fumes were dangerous and that sparrows he released into the cave "immediately breathed their last and fell".

A cave such as this certainly would become the source of folklore and superstition. It isn't difficult to imagine how people could consider this a portal to the dark underworld. The findings were recently presented by a team of Italian archaeologists led by University of Salento's Professor Francesco D'Andria.

Professor D'Andria has made extensive research into the site of Hierapolis and chronicled how his team found Plutonium by reconstructing a thermal spring from the white travertine terraces of a spring in Pamukkale. Next, his team was able to locate a site containing multiple ruins until they uncovered the temples and pools which anciently described the location of "Plutonium".