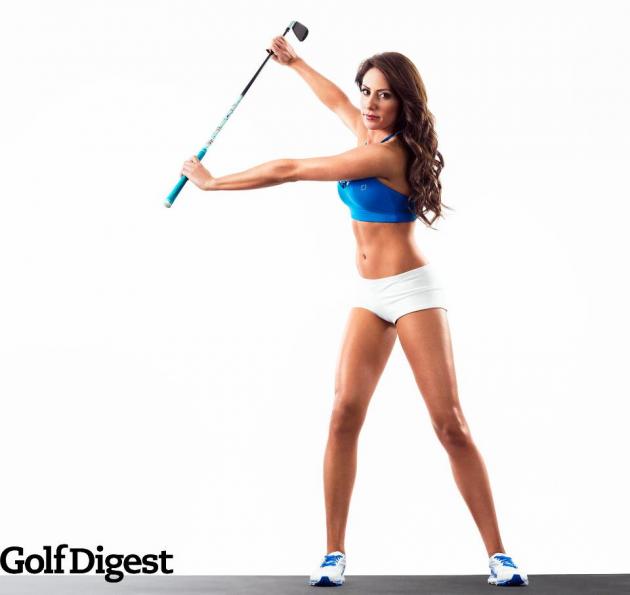 Weilding a golf club and a flat stomach, the Golf Channels Holly Sanders, will be the cover girl of next months Golf Digest.

The issue will dedicate 35 pages to the topic of getting into shape and feature over a dozen photos of the 26 year old.

Sonders makes appearances on "Morning Drive" and "School of Golf", which can be seen on the Golf Channel. Her credentials include, playing for Michigan State's golf team, and having the bragging rights of being able to pull off a "3 or 4 handicap".

Some have argued that Sonders is objectified by the golf channel; she patently disagrees, and admits to making her own fashion choices.

A preview of the photos from the may issue are available to view on the golf digest website.

How did you end up at the Golf Channel?
I got the contact info for Joe Riley [senior director of news & talk] from someone else and badgered him via email and phone until he finally called me back. I was just a 22-year-old kid out of college. He said "You need to do live TV. You need to improve and learn the biz." I went to Little Rock and did hard news—homicides, tornadoes, all kinds of stuff. I did that for almost a year before Joe brought me in for an interview. They took a chance on me, and the rest is history.

Did you have anything to do with the show's name?
No. I'm not sure who ultimately decided on "Morning Drive." But other names were thrown around like Dew Sweepers. I'm glad that didn't stick.

When the show started, the hosts were behind a desk, but you sat on a stool away from them and were usually wearing short dresses and heels. Were you comfortable with that?
Some people would comment, "You're objectifying her." There was just no other place to put me, honestly. The cameras were in the wall. I dress the way I dress because style is very important to me. I love being a girl. You can be a pit-bull competitor. You can want to kick people's asses in every sport, but you can still be feminine and still be sexy.

Why did you stick with golf versus your other sports?
My mom, Sandy, has been club champion for 22 years. She got me started when I was 6. There comes a time when you need to choose where you put your time in, and for me it was golf. Best decision I ever made.

Holly Sonders will be the cover girl for next month’s Golf Digest
http://sports.yahoo.com/blogs/golf-devil-ball-golf/holly-sonders-cover-girl-next-month-golf-digest-150645730--golf.html

Related Topics:Holly Sonders
Up Next

“Gate to Hell” in Turkey in ruins of Hierapolis