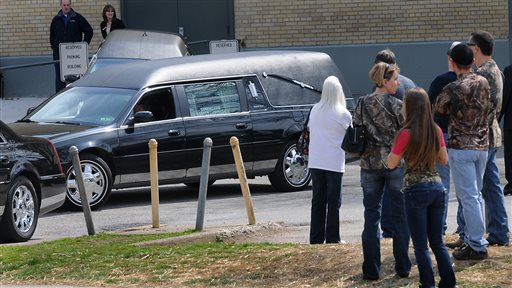 The late Shawn Gandee, reality TV star of "Buckwild", was buried Sunday. His mother, Loretta Gandee took solace in her son who avidly professed his faith to her. Her son had told her just a month before his death that he was confident he was heaven-bound upon death; Shawn was a baptized member of the Baptist Church.

Artesia News reports, he Rev. Randy Campbell told the many young people in the crowd he understands that life bombards them with difficult choices. But he urged them to follow Shain Gandee’s lead and embrace their faith now, while they are energetic and engaged.

“This life will hand you a lot of things and call it pleasure, but there is nothing that brings greater joy to a person’s heart than serving the Lord,” Campbell said. “You may think at this point, you’re having fun, but those days will pass.”

His mother delivered these words of comfort at his memorial service dressed in a hot pink "Gandee Candy" T-shirt. Loretta did not multiply many words preferring instead to sing a hymn. Her son is believed to have died early Monday morning April 1.

"I know where Shain is," Loretta Gandee told the family, friends and fans crammed into the Charleston Municipal Auditorium. "He said about a month ago, `I know when I die I'm going to heaven.'"

Shawn along with his uncle and a friend were last seen leaving a local bar at around 3:00AM.

Their truck and bodies were later found partially submerged in "deep mud". The group had gone driving up in the mountains where they veered off course and into the mud. The Rev. Randy Campbell delivered the eulogy and urged the young to turn to God.

He admonished them that while they are young life seems to be full of fun, but those things fade and eventually all that matters is God. Crowds of mourners, many of whom were dressed in "camo", were lined up to pay final respects to the "Buckwild" star.