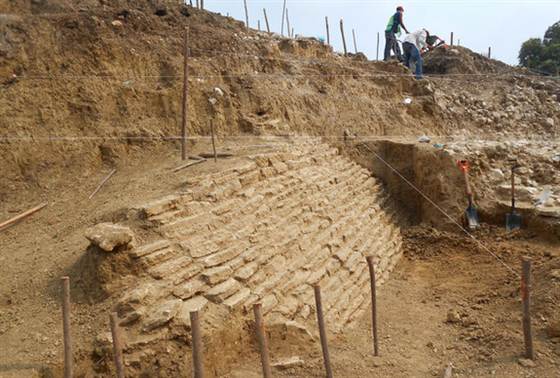 National Institute of Anthropology and History
Monumental stone architecture has rarely been found in Veracruz, archaeologists. The remains of this ancient pyramid were discovered in Jaltipan.[/caption]2,000- Year- Old Graves Found in Mexico

Construction crews in eastern Mexico happened upon an unlikely discovery. An ancient settlement containing pyramid ruins and 30 skeletons is thought to be approximately 2,000-years-old according to archaeologists.

According to the National Anthropology and History Institute, or INAH, clay figurines, mirrors, jade beads and animal remains were also discovered at the site which lies in the village of Jaltipan, southeast of Veracruz.

At this time, very little is known about the settlement or the people that inhabited it. The area is thought to have been active from about the first century A.D. until 600 or 700 A.D.

Archaeologist Alfredo Delgado reported in a statement, "All that is known so far is that of the 30 burials, two at least belong to infants."

Thought to possibly be left as companions in the underworld, deer antlers and bones belonging to deer, fish, dogs, coyote and birds were found in the graves.

Research leader Alfredo Delgado said the discovery occurred in the course of construction work being done in the area.

“Analyses will enable us to see whether this site was multicultural, as is indicated by the materials found, or whether the inhabitants were all of the same genetic type.

“This find has great value not only for the number of skeletons found, but also for the fossils that have appeared, and which at some time were brought from the central part of the country, since in this region that are no remains of this kind,” the archaeologist said.

Artifacts found at the site hint that the settlement may have been multicultural. Mayan figurines and stonework were discovered alongside pottery that appears to have come from Teotihuacan, an ancient city.

The 39 foot pyramid was found on a hill and appears, according to researchers, to be either Mayan or Tagin.