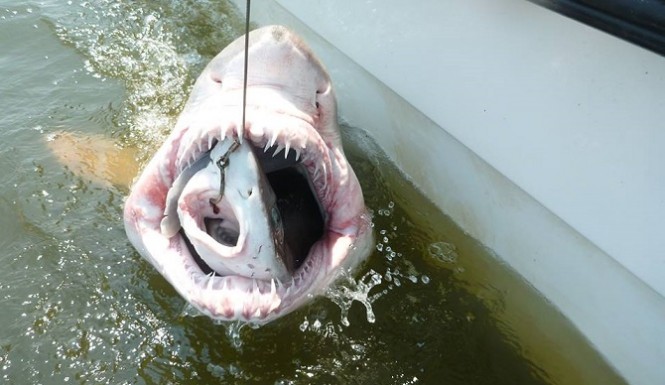 In a bizarre capture, bait is attacked by 3-foot shark, which is then 'completely swallowed' by a large sand tiger shark Photo courtesy of the University of Delaware
[/caption]Delaware Researchers Capture a Turducken Shark

Delaware researchers were eager to recapture a sand tiger shark which has previously been tagged for observation purposes.

Their initial bait was a menhaden fish which was eaten by a three foot dogfish shark. However, the researchers struck eureka as the dogfish turned out to be an irresistible bait in its own right. A female sand tiger shark came up to the surface just as they were hoisting up the dogfish and swallowed it whole, reports GrindTV.

That prompted one of the researchers to comment that such a "shark within a shark" should bear a turducken-like name after the culinary dish which stuffs a boneless chicken inside a boneless duck which is in turn stuffed inside a boneless turkey.

The photograph of the unique capture with its "turducken" commentary has gone viral. The researchers are from the "Ocean Exploration, Remote Sensing, Biogeography Lab" known simply as the ORB Lab.

“The dogfish was about 3 feet long and completely swallowed by the sand tiger shark,” University scientists wrote on their ORB Lab Facebook page.

The photo, which has received dozens of comments since it was posted, has been shared more than 1,100 times.

They observe sharks and other species and were recapturing sharks whose observation tags has come off.

The ORB posted information regarding sand tiger sharks. They report that the sharks can have as many as 56 rows of teeth in their jaws and lose a tooth a day on average. Their many razor-like teeth give them a frightful appearance.

For those humans who fear ending up in the same position as the inner shark, you may want to take a look at this infographic, which demonstrates just how much greater a threat we are to sharks than sharks are to us.

Only 12 humans were killed worldwide by sharks in 2011, according to National Geographic.

Horrified by these staggering numbers, Joe Chernov and Robin Richards creted the info graphic below.

How Many Sharks Are Killed Per Hour? This Graphic Will Shock You (INFOGRAPHIC)
[/caption] Check out the crazy shark within a shark courtesy of the University of Delaware. Let us know what you think: Is “turducken of the sea” an appropriate label here?
[/caption]

On The Web:
‘Turducken’ of the sea–scientists off Delaware catch shark within a shark
http://www.grindtv.com/outdoor/nature/post/turducken-of-the-sea-scientists-off-delaware-catch-shark-within-a-shark/

Turducken Of The Sea: Shark Within A Shark Puzzles Scientists
http://www.inquisitr.com/904287/turducken-of-the-sea-shark-within-a-shark-puzzles-scientists/