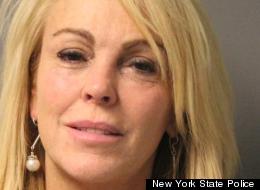 Like mother, like daughter? That seems to be the case for Lindsay Lohan's mother, Dina, who was arrested this week by Long Island police for driving drunk, reports the Huff Post.

Officials from the New York State Police indicate that Lohan was pulled over by officers while driving 77 mph in a posted 55 mph zone on the Northern State Parkway.

Results of a breathalyzer test indicate that Lohan's blood alcohol level was 2.0, which is more than double the legal limit allowed by New York State. Although she initially indicated that she was injured during the arrest process, she later denied making such a claim.

After being booked on one count of speeding and two counts of driving under the influence, Lohan was ultimately released into the care of an unidentified individual, who sources insist was not her daughter Lindsay. Lohan is expected to appear in New York traffic court sometime in late September although an exact date has not been given.

Mark Jay Heller, Lohan’s attorney, said his client realized the seriousness of the matter and that the district attorney considered such cases a top priority.

“I am confident that as a first-time offender, with absolutely no prior record, that the judicial system will treat Dina Lohan with even-handed fairness,” he said in a statement.

Individuals who are found guilty in New York State of driving while intoxicated face suspension of their driver's license in addition to civil penalties and fees.