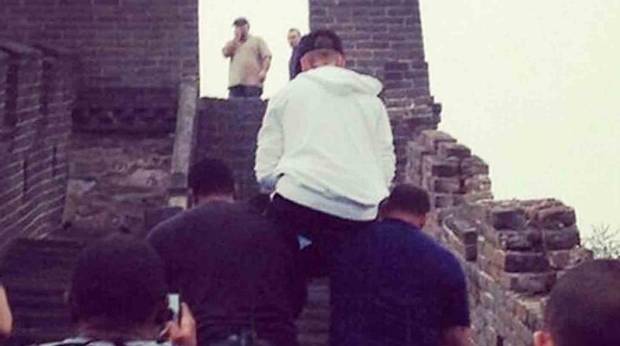 Great Blunder on the Great Wall for Justin Bieber[/caption]Justin Bieber continues to wow people around the world. But unfortunately for Belieber’s everywhere, it’s not because of his music or boyish looks. Instead the pop star made his mark on China by committing one of the biggest travel mistakes anyone can make. Whether he was tired, lazy, or just busy tweeting, the pop star thought that instead of walking the Great Wall of China on his own, he would have his bodyguards carry him across the long stretch.

Pictures lit up the Internet after the event happened and people began calling Bieber’s bodyguards “minions” while also criticizing the star and mocking him. One Canadian link even said that they were fed up with the young man and that America should adopt him as their own. As the news continued to circulate, bloggers in China referred to Bieber as ‘xio pi hai,’ which loosely translates to a toddler who wears toilet-training pants.

Whether or not you like Bieber’s music is your choice. But the way that he continues to travel the world and disrespect other cultures is beginning to get out of hand. Just a few months ago he had to cancel events in the United Kingdom, due to him being late for a show.

Justin Bieber will continue to travel throughout Asia in the following weeks so hopefully he will stop himself from continuing to make headlines in the wrong way.

Did Justin Bieber’s bodyguards really carry him up the Great Wall of China?
http://www.theglobeandmail.com/life/the-hot-button/did-justin-biebers-bodyguards-really-carry-him-up-the-great-wall-of-china/article14628718/

Justin Bieber Being Carried Up The Great Wall Of China Is The Most Ludicrous Thing You'll See Today
http://www.huffingtonpost.com/2013/10/01/justin-bieber-great-wall-of-china_n_4022683.html