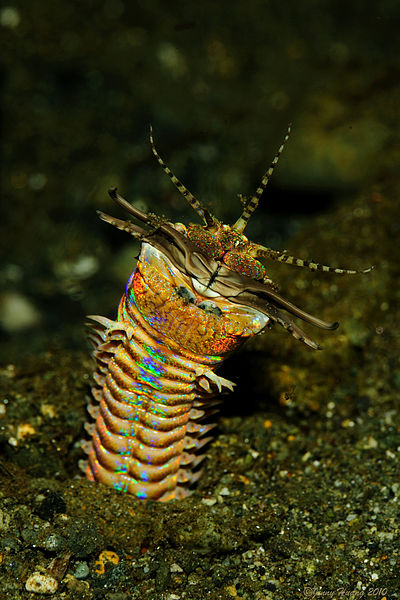 The Mystery Behind Aquarium's Missing Fish Solved: 3.5 Ft Worm[/caption]Woking, England - Maidenhead Aquatics has been investigating the disappearance of fish in their 200-gallon fish tank for years now. The tank is twelve years old and recently began to leak. Upon draining out the tank to clean it out and patch the leak, they discovered the root cause of the disappearing fish: a 3.5 foot Eunice aphroditois better known as a Bobbitt worm.

Staff now believe that the worm may have made its way into the fish tank ten years ago when rocks were imported into the tank. Bobbitt worms are predatory in nature and consume fish which they are able to grasp with their razor sharp teeth. It has been reported that in some cases the worm is able to strike its prey with such a velocity as to sever it in half. Bobbitt worms will eat anything, but residing in a relatively small fish tank gave it a constant fish diet.

The poaching invertebrate detached into three segments when staff attempted to extract it from the tank. The tail section died within 48 hours, but the mid-section and front section are alive and well.

Bobbitt worms are not known to grow to this size in the wild.