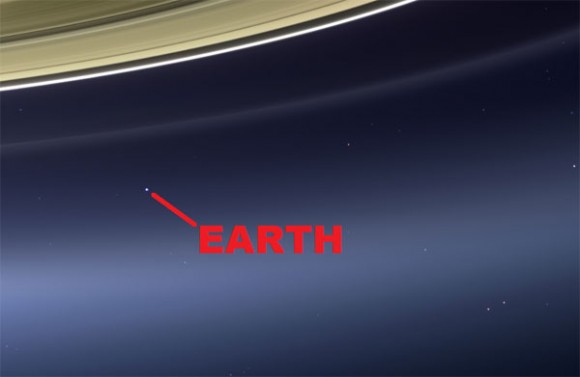 NASA has released a stunning new composite image of Saturn, in which its moons, rings, the Earth, Venus and Mars are all visible (Pic: NASA/JPL-Caltech/SSI)[/caption]Stunning new images of Saturn have been released to the public by NASA. The images were collected in July and after some careful editing, the images have been assembled for display. The wide-angle lenses on the Space Probe Cassini produced 141 lush images of the distant planet and even captured Earth, Venus & Mars in the image. Usually, attempts to align a photograph of Saturn and Earth would result lens damage by in taking direct sunlight.

Captured in the images is a sweep of Saturn's surface 404,880 miles wide along with the all of inner-ring system and every outer ring up to the penultimate E ring. If that doesn't seem astounding, consider that the diameter of the E ring is the same distance from the Earth to the moon.

The probe is powered by a plutonium-based engine which scientists hope will continue to operate for four more years. The probe was set off on its space journey back in 1997. Since that time, it has discovered that Saturn had new moons previously unknown and deposited the Huygens lander on Saturn's Titan moon. “This mosaic provides a remarkable amount of high-quality data on Saturn's diffuse rings, revealing all sorts of intriguing structures we are currently trying to understand," Matt Hedman, a Cassini participating scientist at the University of Idaho in Moscow, said in a statement.

It is reported that the total number of discoveries made as a result of the probe number in the hundreds.

SPACE ... the FINAL FRONTIER: These are the images of the star probe Cassini
http://www.theregister.co.uk/2013/11/13/space_the_final_frontier_these_are_the_images_of_the_star_probe_cassini/