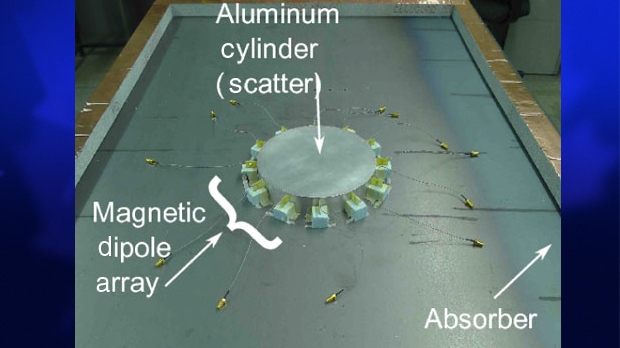 In this image from the University of Toronto, the setup used by Prof. George Eleftheriades and PhD candidate Michael Selvanayagam to create a thin, active invisibility cloak is pictured.
[/caption]New Invisibility Cloak Created

Physicists based in the United States have written an article in the "Physical Review Letters" which chronicles their efforts to design an invisibility cloak. It should be noted that the group is not necessarily gunning for a cloak such as the one famously used by the fictional character Harry Potter.

Instead, they are searching for the best means to make select spectrum of electromagnetic waves invisible. Duke University's Professor David Smith, a researcher in the study, states that when people consider the concept of an invisibility cloak, they think in terms of blocking the wavelengths visible to the human eye. Prof. Smith explained that the spectrum of visible wavelengths is small when compared to all the other frequencies. A perfectly fine application of a partially invisible cloak might be to allow wireless frequencies to become invisible to objects which would otherwise impair reception and phone quality. In short, he explained that there may be a wide range of applications for invisibility cloaks in medicine, science, consumer applications, and the military.

Thus far, the researchers believe that the best results will likely come from what are known as active cloaks. In this context, active implies the cloak will be driven by some electrical power source. It is arguable if Harry Potter's cloak was active or passive. It had no electrical source, but it was powered by a powerful enchantment.

Curved iPhones in The Pipeline For Future Releases?