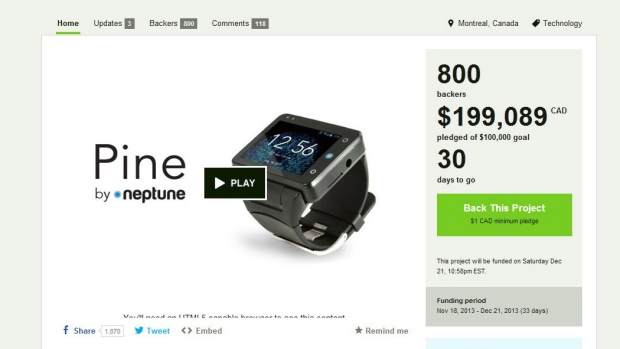 Simon Tian, aged 19, has secured almost $200,000 to develop and manufacture a new smartwatch. The teenager from Montreal used Kickstarter, a crowdfunding website, to raise the money. His initial goal of $100,000 was accomplished in just one day, and he had raised almost $200,000 with 30 days left in his fundraising campaign.

"What I learned is that in 2013 it's actually possible for small startup companies like us to develop products as competitive as what the big guys are coming up with, because material costs have been going down for years and they've been made accessible — all the different chips and components — not to only large orders but to small orders as well," said Tian.

"So that's what's really permitting us to develop this product."

The watch will be called Neptune Pine, and Tian realized it was possible to make this watch after touring Chinese factories. He said the main thing allowing him to manufacture this watch was consistently falling prices of materials. Because the materials have become so inexpensive, it is possible to manufacture a watch on a small scale. Before it only made sense for larger companies with big orders to manufacture such items, because the potential of high sales volume is what was proving profitable.

"It would basically circle around the wrist and when you remove it you would have a three- or four-inch screen that would be entirely large enough for smartphone functionability," said Tian.

The watch will have a bigger screen than a traditional watch. Tian says the smaller screen size is what is limiting the smartwatches on the market. His plan is to manufacture 2,500 Neptune Pines with a base selling price of $335. The basic model will store 16 gigabytes, and for $60 more the storage will be 32 gigabytes.