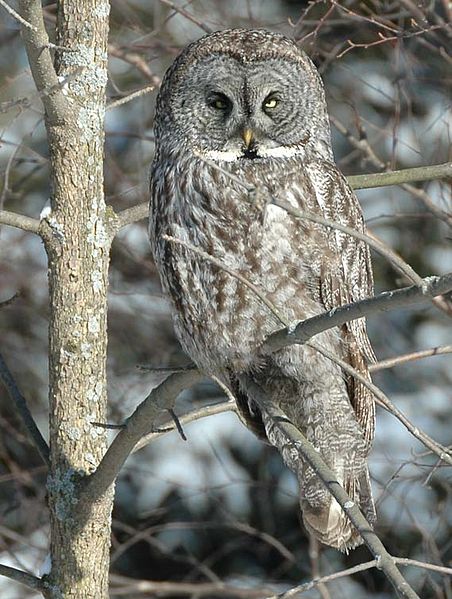 Some species of owl, such as the Great grey owl above, have developed a softened down which creates less noise when cutting through the air in flight[/caption]Ever wonder how an owl is able to sneak up on its prey without making a peep? The secret is in the bird of prey's soft feathers. Scientists have studied the owl's acoustic stealth capabilities when accelerating through the air and conclude that humans may someday be able to adapt that technology into planes for a quieter ride.

Owl feathers are able to virtually eliminate aerodynamic noise while in flight. It may someday be possible that submarines, airplanes, and wind turbines may benefit from owl-based technology. Dr. Justin Jaworski of the Department of Mechanical Engineering and Mechanics at Lehigh University stated that there are at least three distinct physical attributes to the owl which give it the stealth capability.

As per Dr. Jaworski those capabilities are a porous wing trailing which gives it a soft quality, downy soft material at the top of the wing, a flexible wing tip, and rigid comb-like layers of feathers along the edge of the wing. He also admits that the velvety down-like cover on owl wings has not been sufficiently studied for its role in noise suppression. For now, he and other researchers are trying to create a mechanical replica of an owl wing that duplicates the stealth the bird develops naturally.

On The Web:
Owls studied to unlock stealth secrets
http://www.dailymail.co.uk/news/article-2513106/Secret-owls-silent-flight-revealed-Scientists-uncover-birds-soft-feather-technology-used-make-quieter-aircraft.html