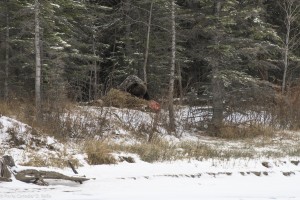 Famous grizzly caught on video[/caption]The grizzly bear spotted attacking a black bear earlier this summer is back in the news. Banff national park staff caught this large grizzly on video, which was later posted to YouTube.

The grizzly bear is known as Number 122, and it is estimated to weigh 600 to 700 pounds. The large male grizzly was seen eating an elk carcass then covering the carcass. He then sleeps over the carcass to establish that this meal belongs to him.

In efforts to keep visitors safe, park staff removed the elk that had fallen into the river earlier in the week. The dead elk was removed by helicopter but this elk was either missed or had drowned recently. Once it was found by the large grizzly, the park closed the area until Number 122 had finished feeding on the carcass. After feeding on the carcass for nearly 7 days, only the hide and bones were left.

While female grizzly bears, especially females with cubs, are preparing to hibernate for winter, male grizzly bears can still be seen searching for food. Grizzly bears have been spotted as late as January. Visitors are advised to practice bear safety at all times when in the parks.

Harry Styles Announces that He is Single