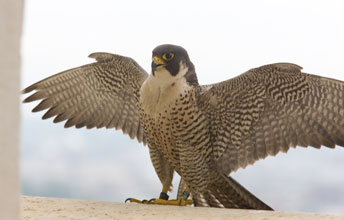 The Peregrine Falcon is a crow-sized bird with a slate blue back and a cream-coloured chest covered in dark markings. Peregrine Falcons have pointed wings that span about one metre, a narrow tail and adults have a prominent black “moustache.” The dark feathers on the falcon’s head make the bird look like it’s wearing a helmet. Another distinguishing feature of this falcon is its bright yellow feet and legs.
[/caption]Hudson Bay, Canada - This large saltwater bay surrounding four Canadian provinces is a major breeding ground for the Canadian peregrine falcon. During the breeding season, peregrine falcons cover their chicks in down-like feathers to incubate them. If it rains, the falcons stand over the eggs with outstretched wings to keep them dry.

Apparently, there are limits to how long the adults are willing to cover their chicks. The frequent heavy rains are forcing adult falcons to simply abandon their nests leaving the chicks exposed to the cold temperatures in wet feathers. The result is the chicks die of hypothermia.

A study by Alberta’s Circumpolar Institute in the Nunavut province, the northernmost landmass to the Hudson Bay, studied 30 falcon pairs and their chicks, reports the CBC.

They found that the mortality rate of chicks following a heavy rain was 33%. In one instance, the researchers witnessed a mother stand idly by as her otherwise well-fed chicks began to succumb to exposure from the cold following a rain. The mother brought them more food in an effort to revive them, but when that failed she killed them and subsequently ate her young. It was the first documented instance of infanticide among peregrine falcons.

“They’re completely covered in fluffy down,” says Alastair Franke, of the University of Alberta’s Circumpolar Institute. “That down gets wet very quickly.”

“In extreme weather conditions where adults are exposed, at some point they give up,” Franke says.

One N.W.T. bird expert tells the CBC the plight of the falcons shows action needs to be taken on climate change.

"We are not doing much in response to climate change in terms of mitigating it or stopping the causes of it,” says Bob Bromley, a Yellowknife ornithologist and a member of the Northwest Territories legislature.

"They are sort of a canary in a coal mine," Bromley says.

rob ford tired to buy crack video according to wiretap