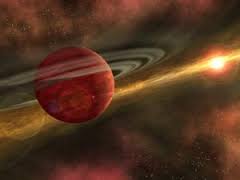 The gigantic planet, first discovered by infrared cameras and the Magellan telescope in the Atacama Desert in Chile last month has mystified scientists and astronomers alike. Named planet HD106906b, orbiting a single star, it is larger than Jupiter and is approximately 60 billion miles from it's sun. Scientists speculate that the planet formed around the same time as the star it orbits. Bewildered by it's existence and massive size scientists conclude that had the planet continued to expand, it would have exploded causing a binary solar system.

"This system is especially fascinating because no model of either planet or star formation fully explains what we see," study lead researcher Vanessa Bailey, a fifth-year graduate student in the University of Arizona's department of astronomy, said in a statement.

It is not common occurence for a planet as massive as HD106906b to survive so close to it's sun. The latest data from the Magellan telescope indicate a water-like substance on the surface of the planet eluding to the hypothesis that there could be life forms inhabiting it.

In the most commonly accepted theories of planet formation, it is thought that planets that orbit close to their parent star, such as Earth, began as small, asteroid-type bodies that clumped together in the primordial disk of gas and dust around the burgeoning star. Yet, this process operates too slowly to explain how giant planets form far away from their star, the researcher said.

"A binary star system can be formed when two adjacent clumps of gas collapse more or less independently to form stars, and these stars are close enough to each other to exert a mutual gravitation attraction and bind them together in an orbit," she explained.

Giving the size and comfortable distance from it's star, HD106906b's ability to sustain life could be the turning point in human history of this planet as we know it.

Whether or not scientists have found an "earth-like" planet is yet to be known. Further investigation, photos, and experiments will need to be conducted before an scietific conclusion can be made on the future of life as we know it.

"Every new directly detected planet pushes our understanding of how and where planets can form," study co-investigator Tiffany Meshkat, a graduate student at Leiden Observatory in the Netherlands, said in a statement. "Discoveries like HD 106906 b provide us with a deeper understanding of the diversity of other planetary systems."

The team submitted their research on the discovery of the distant orbiting planet for publication in Astrophysical Journal Letters.

alien planet found:Giant alien world discovered where it should not exist
http://www.latimes.com/science/sciencenow/la-sci-sn-gigantic-alien-planet-discovered-where-it-shouldnt-be-20131205,0,5223068.story#axzz2mqNF4HM7

Meet The Planet Astronomers Say 'Shouldn't Be There'
http://www.huffingtonpost.com/2013/12/06/most-distant-orbiting-planet-university-arizona_n_4398570.html?ref=topbar