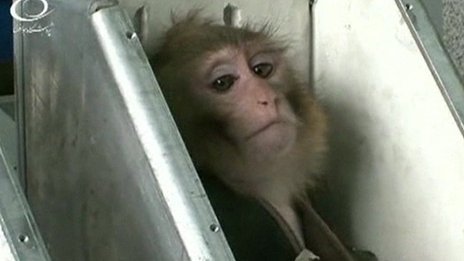 Iran says it has successfully sent a monkey into space for the second time this year as part of a programme aimed at manned space flight.
[/caption]For the second time in this year the Islamic Republic of Iran has sent a chimp into outer space. As per the nation's newly elected president, Hassan Rouhani, the monkey returned back safely and sound. It should be noted though that the first monkey's survival has been disputed given that the animal retrieved from the capsule was not the same one that went into it. The current space primate was named Fargam meaning "auspicious" in Persian.

Naturally, given Iran's status as a state sponsor of terrorism with nuclear power ambitions, a space program gives other nations concerns that the space program may someday be weaponized. The first flight earlier this year sent a monkey as high as 75 miles for a sub-orbital flight in a Pishgam rocket. Iran disputed the allegations of monkey switching on their first flight saying the images released of the animal pre-flight were from another animal. Had the right ones been made public from the start, people would know the animal being pulled from the rocket was the same one which had gone into orbit. Iran has been trying to get a monkey into outer space since 2011 when their first attempt at launching a primate failed.

Anne Frank heading to big screen: Movie To Be Animated