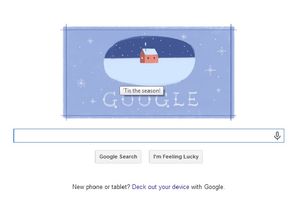 Google celebrates this holiday season with a Doodle hat-trick[/caption]This week has seen the Mountain View, California based U.S. technology giant Google present three holiday themed Doodles. According to a U.K. based newspaper publisher Daily Mirror's website (www.mirror.co.uk), the first hat trick package was a doodle indicating two children on a sleigh pulled by a horse. The horse is seen hammering across the thick white snow on a wintry backdrop; this theme appeared on the Christmas Eve. On Christmas Day, the Google creative team made a doodle showing a snarling traffic against the backdrop of a lively cityscape decorated with festive lighting and an outstanding shadowed Christmas tree.

During today's Boxing Day, the Google Doodle shows a solitary, simple cottage house shrouded in deep snow, in what appears like an eyeball viewpoint. The dampening mood in the backdrop is filled with falling light blue snowflakes, and on the same backdrop snow can be seen bellowing from the protruding cottage chimney. According to (www.mirror.co.uk) top trending topics column, the Google Doodle first appeared in the year 1998. The very first Doodle illustrated the Burning Man Festival in which Google founders Sergey and Larry were in attendance. The doodles have since become a regular feature in Google homepage, and they demonstrate memorable events, holidays and anniversaries of eminent persons and marked national days of countries globally.

Christmas holidays are usually celebrated with lots pomp and color all across the world, in U.S. it has been a busy day for postal and delivery service Corporations like UPS and FedEx. According to Elizabeth Chuck, a staff journalist with the news Corporation NBC; two U.S. leading package shippers took to the tarmac on Thursday, in order to beat time and deliver packages to angry customers after their Christmas shipments and gifts were delayed. Both FedEx and UPS blame the late delivery of packages to consecutive weeks of poor weather conditions and record sales from the on-line portals. UPS had failed to make deliveries and pickups on Christmas Day, but managed to beef up the night workers in its hub in Louisville, Kentucky to prepare packages due for delivery on Thursday and Friday.