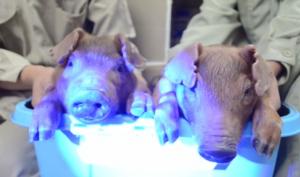 By borrowing a technique from the University of Hawaii at Manoa School of Medicine, scientists from the South China Agricultural University were able to create ten piglets that are able to glow green under black florescent light. The technique used jellyfish DNA to achieve the glow-in-the-dark effect.

The pioneers of the glow-in-the-dark DNA from the University of Hawaii at Manoa School of Medicine believe that their technique will lead to cost-effective medicine to treat hemophiliacs. Researchers in Hawaii and Turkey successfully created the litter of eight rabbits (pictured), which included two kits that glow green when the lights are out. The fluorescent colouring is an indicator that genetic material injected into the embryos was incorporated into the rabbit's natural make up
[/caption]

Dr. Stefan Moisyadi, one of the researchers in Hawaii, said that the life-saving enzymes needed by hemophiliacs are most cost-effective when produced in animals as opposed to being created in laboratories using expensive equipment.

While that may be, and assuming that PETA takes no lab-sabotaging exceptions, it doesn't answer the question of why the animals had to be grown using jellyfish DNA for a glow-in-the-dark effect. Dr. Stefan Moisyadi said that the animals are not affected by the foreign DNA and will have the same life spans as the garden variety animals. Is anyone interested in eating glow-in-the-dark green ham? Are there matching eggs?

Baby born on boat due to floods in Brazil: VIDEO