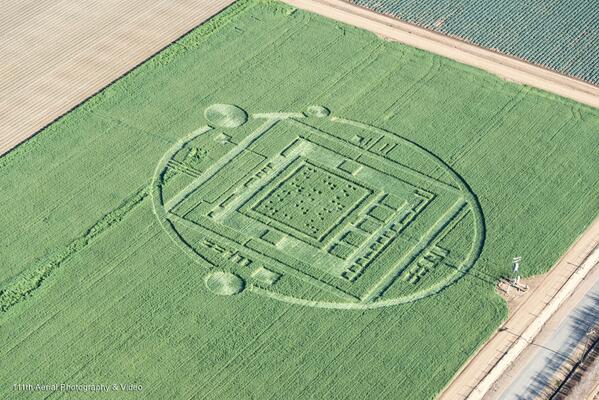 California Crop Circle Has Experts Scratching Their Heads[/caption]Acre-sized Crop Sign Appears in Salinas, California
Salinas, California - residents in this central California town of 150,000 are perplexed at the appearance of mysterious crop sign of unknown origin. The elaborate sign was first spotted by Julie Belanger, a local aerial photographer, this past Monday.

Speaking to NBC news, Belanger expressed her surprise at seeing such a sign in the middle of a field. Obviously, crop signs such as these spark interest of possible alien involvement such as those made famous in the blockbuster movie "Signs". Belanger told local NBC KSBW channel 8 that the crop sign was beautiful. While she admits she believes in the existence of aliens, she stated that it's anybody's guess as to who made the crop circle. However, she affirmed that she flew over the field by chance and had not heard about it prior to her flight.

The size of the crop sign is roughly a full acre. The owner has hired security to keep out a flood of visitors to his land. Also, two men who remained anonymous, posted a two-minute clip of the crop sign wherein they speculate about who created it. One person commenting on the video put it succinctly: the two anonymous men who made the video are the creators of the crop sign.

So far no one, terrestrial or extra-terrestrial, has come forward to claim responsibility.