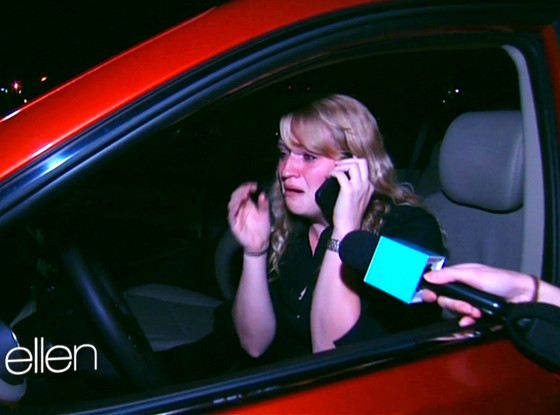 Concord, New Hampshire waitress Sarah Hoildahl was serving tables during a slow shift at Ruby Tuesday when she overheard two National Guard members. The two female soldiers were discussing their late pay due to the government shutdown. Charitably, Hoildahl decided to pick up their tab herself. Instead of a bill, she gave the soldiers a note:

"Thanks to the government shutdown the people like you that protect this country are not getting paid, however I still am. Lunch is on me thank you for serving ladies! Have a good day!"

The story made the rounds on Facebook and eventually caught the attention of Ellen Degeneres, who invited Hioldahl onto her show. After recounting the experience to viewers, Ellen gave her a tip: a 50 inch flat-screen TV and $10,000. The gift has Ms. Hoildahl in tears, thanking Ellen for her generosity. "You are a good person," Ellen repeated.

Ellen's generosity did not end there. A week later she surprised the waitress with a brand new car for her family. Hoildahl thought that she was being interviewed by a reporter, but it was, in reality, producers of the Ellen Show. She was soon surprised to be live streamed onto the show. On the phone with Ellen, the waitress was again in tears of gratitude for the 2014 Hyundai Santa Fe Sport.

Related Topics:Ellen Degeneres
Up Next