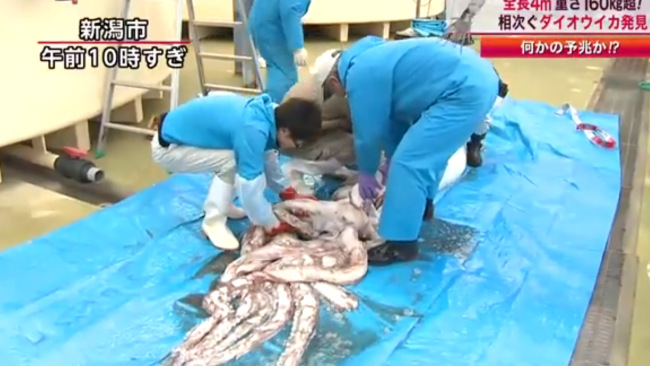 A fisherman in Japan was in for a surprise when he pulled in a net that he had set out to catch a Japanese amberjack. He had positioned the net approximately 70 meters deep in the ocean. The net was almost two-thirds of a mile away from the coastline of the island, Niigata Prefecture.

When the fisherman returned to pull up his net on Wednesday, January 8, 2014, he was astonished to find a 13-foot-long squid inside it. The fisherman told local media reporters in Japan that he had never seen such a large squid. The squid was transported to a local government marine research institute in Japan for researchers to examine. The squid was determined to be male, and he reportedly died not too long after being brought up to the surface.

This story came shortly after another one was published about a giant squid being captured along the coast of a Southern California beach. The monstrous radioactive squid in the California story was said to be 160 feet long and ended up being a hoax. The image of the squid turned out to be photoshopped. However, the report from Japan was proven to be legitimate, unlike the hoax pulled in California.

Elusive giant squid found in fishing net off the coast of Japan
http://www.telegraph.co.uk/news/worldnews/asia/japan/10566653/Fisherman-catches-giant-squid-off-Japan-coast.html

Giant squid captured off Japan, and this is no hoax
http://www.petethomasoutdoors.com/2014/01/giant-squid-captured-off-japan-and-this-is-no-hoax.html