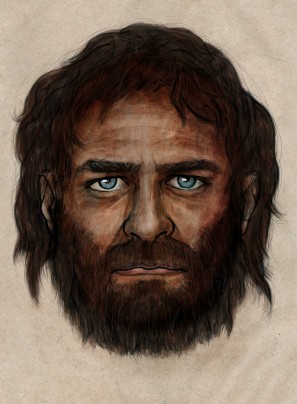 Berlin, Germany - A joint study by scientists from Australia, Europe, and the United States examined DNA evidence from an ancient hunter found in Spain and concluded the 7,000 year-old-man had blue eyes and dark skin. The finds have been published in the interdisciplinary journal called Nature, which is one of the most often cited journals for its authoritative studies. The evidence suggest that Europe was once populated by a demographic of people that is no longer found on the continent.

"We have the stereotype that blue eyes are found only in light-skinned people but that's not necessarily the case," lead researcher Carles Lalueza-Fox said in a telephone interview Tuesday with The Associated Press.

The ancient man suggest that the stereo type that blue eyes are features of white people is just a stereotype. The remains of this ancient hunter were collected from a cave in Northern Spain. According to Carles Lalueza-Fox of Barcelona's Institute of Evolutionary Biology, the man's eyes were as blue as modern Scandinavians, but his skin was darker than that held by modern Europeans.

The DNA evidence found at the La Brana Caves in Leon, Spain, also indicate that the hunter genetically would have an intolerance to digesting starch and milk. That inability made its way into Europe by Middle East farmers from the Neolithic era (10,200 BC to 2,000 BC). He also likely had the ability to fight off smallpox, flu, and measles.

Blackberry 10.2.1 Update Available In Canada – How To Update