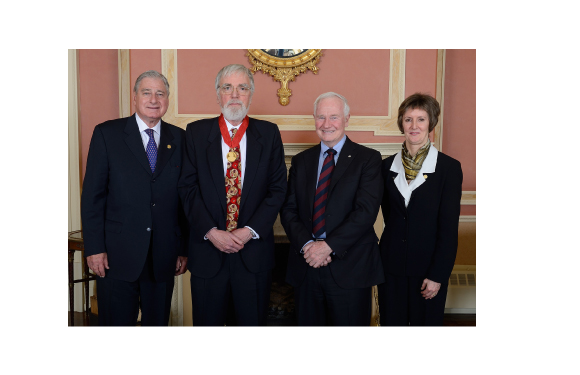 “Our government is committed to developing, attracting and retaining the world’s leading researchers right here in Canada," said The Honourable Greg Rickford, Minister of State (Science and Technology) "The accomplishments of these top natural scientists and engineers demonstrate how our investments in research help build a stronger, more prosperous country, create jobs and secure a better quality of life for all Canadians.”

Originally from Illinois, Doolittle teaches at Dalhousie University in Halifax, and is professor emeritus of the Department of Biochemistry and Molecular Biology. He began studying science when he was in high school in Illinois, where he studied in the lab of a famous scientist.

“Canadian researchers are making stellar contributions in their fields and are highly respected around the world," said Janet Walden, Chief Operating Officer, NSERC "Today we celebrate this talent, from students just embarking on their careers to seasoned researchers making internationally recognized discoveries. NSERC is extremely proud of this world-class talent that is advancing our knowledge and expanding our understanding of the universe.”

In addition to the award, Dr. Doolittle will receive a $1 million research grant,which he has chosen to use to further some of his research projects including his research on Darwin's tree of life. Doolittle believes that Darwin's theory is too simple and that the development of different species is more complex than Darwin suggests. He believes that instead of the tree of life, the history of life is more like a web.

Additionally, Doolittle plans to conduct research on the validity of the human genome. His theory about the topic has become very controversial. He also plans to further his current microbiome research on microbes that live as a community.

Also being announced today are prizes for top graduate students, outstanding university–industry partnerships, interdisciplinary research, ground-breaking discoveries, and excellence in multidisciplinary research. The work of these researchers is helping to improve attention spans in children, revolutionizing the design of cars, solving the growing problem of drug resistance, and providing doctors with new tools to track the effectiveness of cancer therapies.