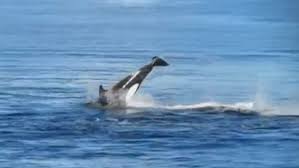 Orcas Attack Dolphins off Vancouver Island
[/caption]A passenger aboard a ferry boat in Nanaimo, B.C. captured a rare video of group of orcas that surrounded several dolphins and killed two. Several onlookers witnessed the rare sighting and described the dolphins as running from the orcas. One witness stated that the orcas were hunting fast by the time they parked their vehicle.

Although these attacks are not uncommon, orcas hunt in different ways. According to the American Cetecean Society, orcas are either Transient, Offshore, or Resident. Resident orcas hunt fish, while Transent orcas hunt larger mammals such as seals, sharks, penguins, and other whales.

As the dolphins and orcas increase in population, experts believe that these kinds of attacks will become more common. Additionally, senior marine mammal scientist, Dr. Lance Berrett-Lennard believes that this attack is a sign that the mammal population is returning to healthy levels. He also stated that these orcas normally hunt harbor seals instead of dolphins because dolphins are harder for them to catch.

Dr. Berret Lennard also stated that dolphins can generally out swim orcas and escape using their agility and group confusion techniques. However, he also believes that while these attacks don't mean good news for the dolphins, it means that dolphins are increasingly populating the strait and that these interactions are a normal part of our ecosystem.