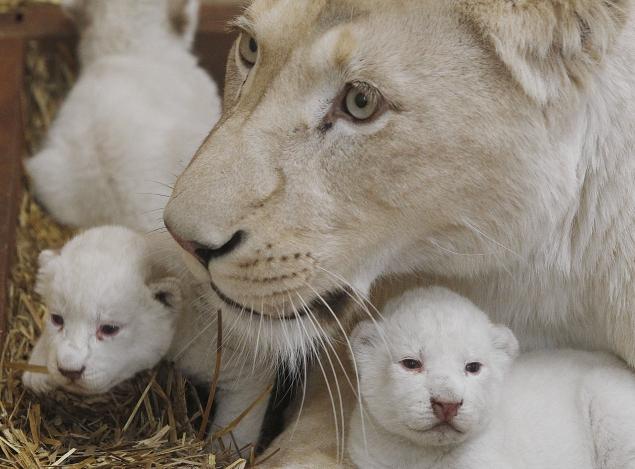 The cubs were born at the zoo in Borysew, central Poland, on 28 January. Photograph: Marcin Wziontek/REX
[/caption]White lions are among the rarest animals in the world. But a lioness in a Polish zoo is the proud mother of three of them.

The three cubs were born on January 28th at a private zoo in Borysew to a two-and-a-half year old white lioness named Ariza. Andrzej Pabich, who runs the zoo, said many white lions have birth defects that often prevent them from giving birth themselves. To give birth to three white lion cubs, said Pabich, is very rare. Pabich also admitted there was worry among zoo staff that Ariza might reject the newborn lion triplets. However, that is not the case. Pabich said that Ariza has been feeding the cubs and is taking good care of them. The triplets' father, a three-and-a-half year old white lion named Sahim, is being kept in a separate cage while Ariza nurses their offspring. The gender of the triplets is not known at the present time. Pabich said he expects to allow the cubs outside in April.

White lions were first reported in the wild in 1938, but gained public prominence in the 1970s. An estimated 90 white lions exist in the world.

The Borysew private zoo opened in 2008. CZAREK SOKOLOWSKI/AP
White lioness Azira lies in their cage with two of her three white cubs that were born last week in a private zoo in Borysew, in central Poland.[/caption]