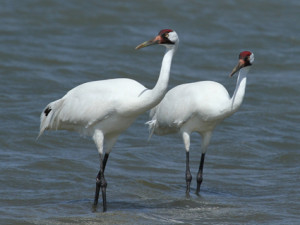 A pair of whooping cranes in Louisiana that had been building its first nest near New Orleans, were shot by an unknown assailant. The birds are considered an endangered species since there are only an estimated 600 in existence today, the descendants of slightly more than a dozen of the species that once thrived along the gulf coast of Florida seventy years ago. State wildlife officials who discovered the pair report that the female whooping crane was killed and the male was very severely injured.

"They were some of our older birds and our best chance for having a more successful nest this year," said Love, the coastal and nongame resources division administrator.

"It's just sickening," he said.

The pair of cranes were part of two groups of birds banded and released by the state into the wild over the past three years. Of the 50 cranes initially released in the hopes of rebuilding the decimated number of whooping cranes in the state, only 32 are known to have survived. Although hunters are currently allowed to shoot snow geese throughout the state, officials agree that there would be no way that any hunter could mistake a 5-foot tall whooping crane for the much smaller snow goose and that the shooting had to be intentional. The injured male bird was transported to the veterinary hospital at Louisiana State University in Baton Rouge for further treatment.

On The Web:
2 endangered whooping cranes shot in Louisiana
http://www.cbsnews.com/news/2-endangered-whooping-cranes-shot-in-louisiana/

Related Topics:2 endangered whooping cranes shot in Louisiana
Up Next

ERWIN The Robot Has Emotions When Interacting With Humans