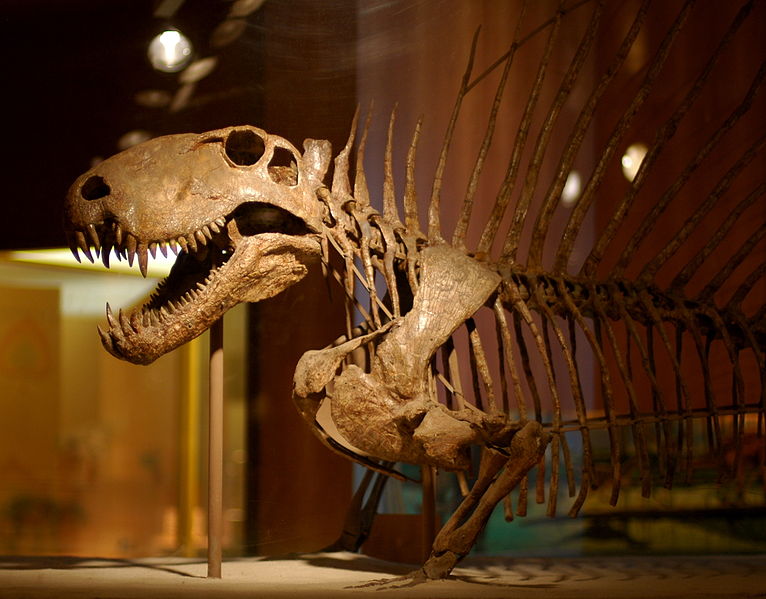 imetrodon is an extinct genus of synapsid that lived during the Early Permian, around 295–272 million years ago (Ma). It is a member of the family Sphenacodontidae. The most prominent feature of Dimetrodon is the large sail on its back formed by elongated spines extending from the vertebrae. It walked on four legs and had a tall, curved skull with large teeth of different sizes set along the jaws. Most fossils have been found in the southwestern United States, the majority coming from a geological deposit called the Red Beds in Texas and Oklahoma. More recently, fossils have been found in Germany. Over a dozen species have been named since the genus was first described in 1878. (Wikipedia)[/caption]

The Synapsid known as the Dimetrodon is considered one of the most terrifying land-based beasts due to what are called serrated ziphodont teeth IE steak-knife like teeth. As such, it would have posed a greater threat than the T-Rex. Now, the two species were separated by about 40 million years of evolution, but the sharp teeth would allow it to taken down a much larger prey with a devastating wound.

Now, Dimetrodons are the subject of a new study by the University of Toronto Mississauga.

Robert Reisz, one of the researchers, is examining fossils from the Permium period predator. One of the characteristics the research is studying is the fin located on the back of the dinosaur.

“The steak-knife con­figura­t­ion of these teeth and the ar­chi­tec­ture of the skull sug­gest Di­me­tro­don was able to grab and rip and dis­mem­ber large prey,” said Reisz.

"Teeth tell us a lot more about the ecology of animals than just looking at the skeleton," he continued. "We already know from fossil evidence which animals existed at that time but now, with this type of research, we are starting to piece together how the members of these communities interacted."

They would like to understand what purpose it served. Some have speculated it was useful in mating rituals while others believe it served to cool the body temperature of the beast.

It is believed the Dimetrodon is the forerunner to many modern day mammals including rabbits. Admittedly, that may require a leap of faith as it would be a huge step down in the evolution cycle to go from a top of the food chain predator to a fast breeding ball of fur. However, the researchers have discovered previously unknown characteristics in the Dimetrodon’s teeth that they believe are links to modern day mammals. An evolutionary tree showing the evolution of tooth serrations in Dimetrodon. From Brink and Reisz, 2014.
[/caption]

Dimetrodon is often mistaken as a dinosaur or as a contemporary of dinosaurs in popular culture, but it went extinct around 40 million years before the appearance of the first dinosaur in the Triassic period.

As Reisz said, "Teeth fossils have attracted a lot of attention in dinosaurs, but much less is known about the animals that lived during this first chapter in terrestrial evolution…This research is an important step in reconstructing the structure of ancient complex communities."

The study was published in the journal Nature Communications.

On The Web:
Dimetrodon with 'steak-knife' teeth was more terrifying than T. rex
http://www.techtimes.com/articles/3271/20140207/dimetrodon-with-steak-knife-teeth-was-more-terrifying-than-t-rex.htm