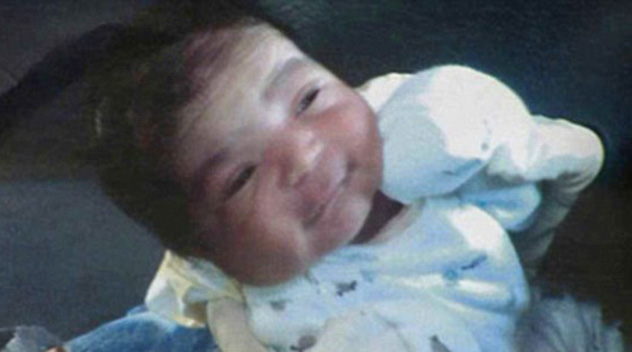 Six-day-old Kayden Powell, pictured after he was found, has been reunited with his parents. Photo: West Branch Police Department[/caption]

Woman Pretends to Be Pregnant and Steals Sister's Baby

She then made off with the child and got as far as Iowa City before police were able to apprehend her. However, when they laid hands on Smith, they found her wearing a fake baby bump and pushing a stroller, but little Kayden was not with her.

It turns out that Smith had dumped the baby outside a gas station inside of a plastic crate.

Thankfully, the baby was in very good condition despite the cold February weather. She confessed to police that she had taken the baby from it's home.

Now, Kayden is back home with his mother and father. Police received the distress call at 4:30AM when Brianna Marshall was unable to locate the infant. The police investigation revealed an ongoing plot by Smith to misrepresent herself as being pregnant using e-mails and social networking messages.

She even declared that on February 5, she had given birth to a child. She has now been charged with felony kidnapping. It is believed that she removed Kayden from his bassinet while his parents were sleeping. It isn't clear what her destination was when she was caught.

A spokesman for the Arapahoe County, Colo., sheriff’s office declined to discuss the details of her arrest there. A spokeswoman for the district attorney’s office in Tarrant County, Texas, said it’s not clear why Colorado authorities released Smith instead of sending her back to Texas.

Why Was Flappy Bird Game Removed From App Store?