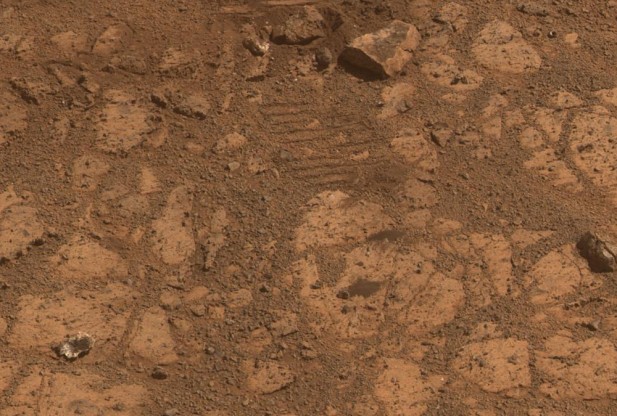 NASA/Associated Press - FILE - This composite image provided by NASA shows before and-after images taken by the Opportunity rover. At left is an image of a patch of ground taken on Dec. 26, 2013. At right is in image taken on Jan. 8, 2014 showing a rock shaped like a jelly doughnut that had not been there before. Researchers have determined this now-infamous Martian rock resembling a jelly doughnut, dubbed Pinnacle[/caption]


NASA has solved the one month old mystery behind the jelly doughnut shaped rock that was found in close proximity to the Mars rover Proximity in January. The rock's discovery sparked widespread interest when it was first discovered in a path forged by the rover a dozen days earlier.

So just what was the strange rock? For starters, it wasn't an unknown bacteria living inside the rock which got the nickname "Pinnacle Island". Nor was it debris from the sudden impact of a meteor on the surface of the planet. Nor was it a sign of intergalactic fun created by Martians who were toying with our comparatively feeble minds. Rather, it was just debris left by the rover itself. The rock is believed to have come loose from the rovers' tracks, according to a release from the Jet Propulsion Laboratory.

"Once we moved Opportunity a short distance, after inspecting Pinnacle Island, we could see directly uphill an overturned rock that has the same unusual appearance," said Opportunity Deputy Principal Investigator Ray Arvidson in a statement. "We drove over it. We can see the track. That's where Pinnacle Island came from."

In fact, NASA claims a careful analysis shows the rock is right in the path of rover tracks. The United States' official space agency claims the tracks weren't easily identifiable until the rover had gotten a sufficient distance away. As per NASA, they are having fun and spirited debates among themselves about the type discoveries being made. The agency believes that Mars is chalk fully of surprise events.

"One of the things I like to say is Mars keeps throwing things at us," Steven Squyres, principal investigator for the Mars Exploration Rover Mission, said during a presentation describing the appearance of the mysterious rock in January.
"We're completely confused. We're having a wonderful time. Everyone on the team is arguing and fighting," he said at the time.

According to the Washington Post, Opportunity recently celebrated 10 years on Mars. Its twin Spirit stopped communicating in 2010. NASA solves mystery of jelly doughnut rock on Mars: 'We drove over it'
http://www.latimes.com/science/sciencenow/la-sci-sn-jelly-doughnut-rock-on-mars-20140214,0,7244515.story#axzz2tKpxE9rt

China’s ‘Jade Rabbit’ takes a licking and keeps on ticking

Fossil Site Found In B.C., One Of Canada’s Largest