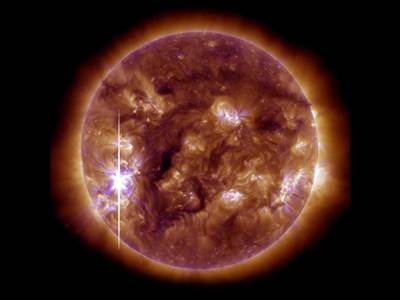 Rare Powerful Solar Flare Unleashed by the Sun[/caption]Early Tuesday morning, the sun exploded with an unusually violent solar flare making it one of the most powerful in years. Fortunately, it wasn't aimed towards Earth, or it would have likely caused problems.

Solar flares develop due to entanglements in the sun's magnetic field lines. Once the field lines reunite they release an enormous amount of volatile energy. What's worse, the flares are able to reach the Earth in just minutes due to the solar wind pushing them at incredible speeds. Had that flare been facing Earth, it could have easily disturbed power grids and/or satellites.

Even more interesting is the fact that the particular sunspot responsible for the flare is on its third evolution around the sun. Even though it's not uncommon for sunspots to endure for many days, sunspot AR1990 is demonstrating an extraordinary amount of persistence along with being quite massive as well.

The sun rotates just like the Earth. However, unlike the Earth, the rotation period is based upon where you are standing. In relation to the center of the sun, it's approximately 26 days. Although sunspots are known to live on the surface of the sun for many days, it is quite rare however for one to survive this long.

Each sunspot is assigned a designation. The one specifically responsible for Tuesday's solar flare is known as AR1990, previously titled AR1667. Every time a sunspot reappears, it is assigned a new number.

Since AR1990 is just starting to face the Earth, it was not directly aimed at us at the time of the eruption. However, in the upcoming week, it will be better positioned to have an effect on our planet.

On a good note, solar flares are responsible for producing some truly extraordinary displays regarding the northern and southern lights.

Man kills Self During safety Lesson: Shoots Himself In The Head