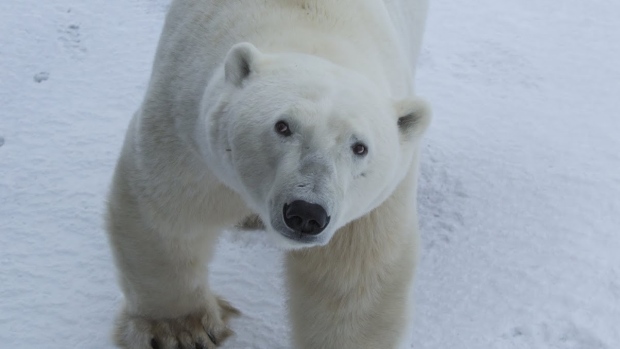 Google Street View captured images of wild polar bears in their natural environment at Cape Churchill in northern Manitoba during their annual gathering in October and November. (Google)[/caption]

Thursday was International Polar Bear Day, and Google is doing its part to celebrate by releasing its first-ever interactive street view experience in the arctic tundra. In Churchill, Manitoba, just south of the Hudson Bay in Canada, Google explorers partnered with Polar Bears International to "bring to bear" rare, stunning images of one of the largest polar bear populations on Earth.

By equipping a "tundra buggy" with a 360-degree camera, Google's "Street View Trekker," researchers were able to map out the entire area in beautiful detail, as curious bears shuffled up to the camera to see what all the commotion was about.

The mapping took place in October and November, the time of the year when hundreds of bears gather around Lake Hudson, waiting for the lake to freeze and hunting season to begin. The project was a collaboration among Polar Bears International, Frontiers North, and Google Maps. It’s International Polar Bear today, so if you live within shouting distance of the Arctic Circle, hug the closest polar bear. (Actually do not do that—an adult male polar bear is nearly half a ton of hungry predator and they are extremely dangerous.) Still, the beasts deserve a little tenderness.
[/caption]

Polar Bears International has been working for 20 years in the region, according to Krista Wright, PBI's executive director. The project aims to increase awareness of the dangers global climate change presents to the polar bear population. "Bringing Street View to Canada's tundra establishes a baseline record of imagery associated with specific geospatial data—information that’s critical if we’re to understand and communicate the impact of climate change on their sensitive ecosystem."

Wright says it is also an opportunity to "share an intimate look at polar bears in their natural habitat."

"You get a sense of how these animals interact with one another and you also have the opportunity to see their size and the power," Wright says.

"It connects people to the Arctic, the imagery is really spectacular, and so there's this opportunity for people to become connected to the ... polar bears and the unique ecosystem that very few people get to actually go see."

The project also mapped the town of Churchill itself, including a skating rink, movie theater, school, and even a bear jail that's used to protect locals from wandering bears who find themselves in the wrong part of town. The images were captured using the Google Trekker, which consists of 15 cameras mounted atop a backpack. (Google)[/caption]

The search giant hopes to add natural wonders to " Google Street View" imagery in online maps. Current maps include venturing to the Brazilian rain forest and the Galapagos Islands, as well as scaling mountains and diving under the sea.

To see the polar bears in their natural habitat, click here!