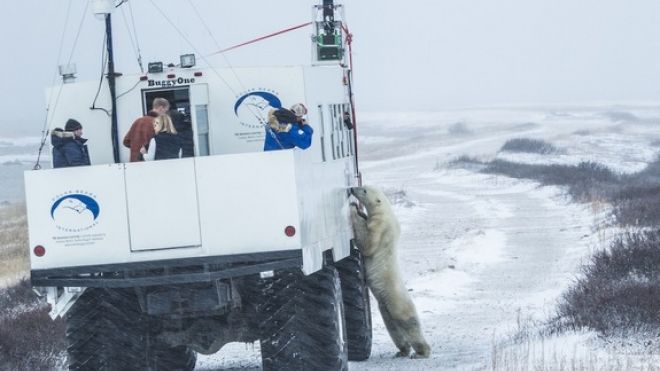 Churchill, Manitoba - The ubiquitous black coned multi-lens cameras mounted atop vehicles snapping up pictures of city streets throughout the world for use in the Google Street View function of Google Maps have been fitted atop arctic sturdy vehicles to include polar bears found in this northern region of Canada. Churchill may only host a population of just over 800 people because of the fierce colds in this town by the Southwest side of the Hudson Bay, but Google is on a mission to map as much of the known world as is humanely possible.

In one picturesque image, a polar bear is seen fully erect as it leans against the elevated Google Maps vehicle. In fact, the cameras are not here at this time by chance. It is International Polar Bear Day and the road views will likely contain shots of polar bears free roaming the landscape. The Google Map team arrived this past October to capture as many of the protected species as they can before the weather changes. Google users will now be able to explore the frozen tundra from the warmth and safety of their homes.

Capturing images from exotic locations is no small effort and requires that Google collaborate with skilled individuals. Prior efforts have included the Denali National Park in Alaska, the Amazon, and remote coral reefs.

In early 2013, Polar Bears International (PBI), which sponsors "International Polar Bear Day", invited the Google Maps Team to bring their cameras to this region and capture the polar bears on digital camera. Google Street View captured images of wild polar bears in their natural environment at Cape Churchill in northern Manitoba during their annual gathering in October and November. (Google)[/caption]

Frontiers North Adventures, an ecotourism enterprise, provided the use of their "Tundra buggies" to Google Maps to safely roam the landscape of Wapusk National Park and other Wildlife Management Areas in this province. The photographs depict the bears going about their daily lives and at times frolicking amongst each other, according to Krista Wright, PBI's executive director.

"Bringing Street View to Canada's tundra establishes a baseline record of imagery associated with specific geospatial data—information that’s critical if we’re to understand and communicate the impact of climate change on their sensitive ecosystem." It’s International Polar Bear today, so if you live within shouting distance of the Arctic Circle, hug the closest polar bear. (Actually do not do that—an adult male polar bear is nearly half a ton of hungry predator and they are extremely dangerous.) Still, the beasts deserve a little tenderness.
[/caption]

Wright says it is also an opportunity to "share an intimate look at polar bears in their natural habitat."

"You get a sense of how these animals interact with one another and you also have the opportunity to see their size and the power," Wright says.

"It connects people to the Arctic, the imagery is really spectacular, and so there's this opportunity for people to become connected to the ... polar bears and the unique ecosystem that very few people get to actually go see."

To see the polar bears in their natural habitat, click here!

On The Web:
Polar bears on Google Maps! Street View comes to the Arctic
http://www.foxnews.com/science/2014/02/27/polar-bears-on-google-maps-street-view-comes-to-arctic/

Related Topics:polar bears with Google Street View
Up Next

Disabled BC Supply Ship Being Towed to Pearl Harbor

Sleeping Infants Could be in Danger From Noise Machines: Canadian Study