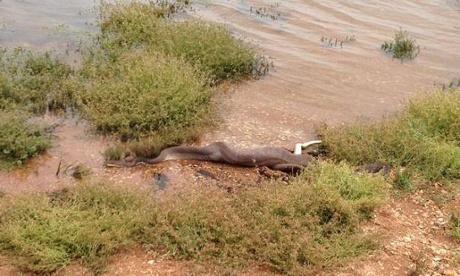 A snake eating a crocodile at Queensland's Lake Moondarra, near the mining town of Mount Isa., March 2, 2014.
[/caption]A snake has been caught wrestling, then devouring, a crocodile in Lake Moondarra in the Australian state of Queensland, the BBC reports.

Author Tiffany Corlis, who took photos of the scene, told the network that the snake ”would roll the crocodile around to get a better grip, and coil its body around the crocodile’s legs to hold it tight.”

"(The crocodile) was fighting at the start, so it was trying to keep its head out of water and survive," she told ABC North West Queensland Radio on Monday.

"But as the morning sort of progressed, you could tell that both of them were getting a little weaker. The snake strangles the croc, which struggled to keep its head above water. Photograph: Tiffany Corlis/ABC North West Queensland/AAP
[/caption]

"Finally, the croc sort of gave in and the snake had uncoiled for a little while and had a brief break and then actually started to consume the crocodile."

Ms Corlis said it was amazing to witness.

"It was just unbelievable," she said. "We were sort of thinking that the snake had bitten off a little more than it could chew.

"But it did. It actually ate the crocodile."

The BBC also reports that the crocodile is a risky choice for snakes to devour because it can fight back, based on an interview with Brian Fry, a biological sciences professor and snake expert at the University of Queensland. When a snake has consumed something that massive, its organs can grow as large as three to four times their normal size and release enzymes in order to digest the animal. Then the snake could stay bloated for a couple more weeks until it starts to slim down. Related Topics:snake eats croc
Up Next