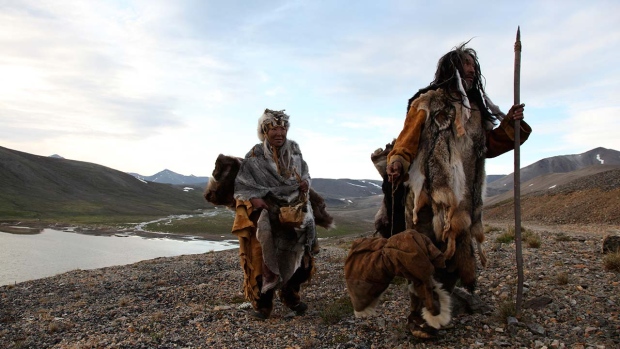 A Kamloops, B.C. anthropology professor is part of a dig in Ethiopia, Africa that is finding evidence 'thinking man' may have developed earlier than previously thought. (CBC's the Nature of Things)
[/caption]In the grand scheme of Earth’s creation, 80,000 years is an extremely small slice of the overall pie. However, within human evolution, 80,000 years is significant. Recently, a team consisting of archaeologists and anthropologists now believes that human evolution began when our ancestors started using their brains for fundamental survival skills.

“That is, when did we begin to think in ways that are common for humans today and distinct from non-modern humans?” said Karl Hutchings, an assistant professor in sociology and anthropology at Thompson Rivers University in Kamloops, B.C., and a member of a team of researchers on a recent dig in Ethiopia.

Mainstream science believes that man developed and implemented cognitive functions to become more “modern.” According to assistant professor of sociology at the University in Kamloops, Karl Hutchings, the real question is when did we think in ways that are similar to humans today. Professor Hutchings is a member of a team at the Gademotto Formation, an archeological site in Ethiopia.

Many members of that team conjecture that discovers found at this site could push back the timetable for brain development by almost 80,000 years. The team also recently published a research paper that denotes the discovery as being significant because it offers direct evidence that the cognitive functions within Homo sapiens appeared earlier than originally estimated.

However, Professor Hutchings is skeptical because this newly acquired data indicates a different date for humans as there are no local sites with similar tools used during this time period. The team has found several sites where a subgroup of Homo sapiens, known as hominids, has been uncovered.

Professor Hutchings was invited as he is the only member with archaeological analysis capability to determine how specific tools were made and why they were utilized. This technology uses sound waves and measurements to break through stones. During his time at the Gademotto Formation, the Professor studied over 200 javelin-shaped projectiles to determine the estimated year. Based on when these tools were constructed provides evidence of cognitive function.

Woman Given Ticket in South Windsor for Applying Makeup