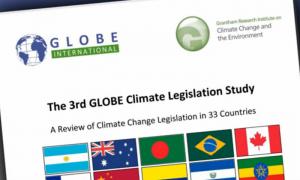 The 27 and 28 Feb 2014 saw leaders from over 100 countries, the UN and the World Bank meet in Washington DC to discuss the current and future state of national legislation designed to reduce carbon emissions around the world. The Global Legislators Organization, often referred to as GLOBE met to mark the publication of a 700 page document hat investigates the legislation regarding climate change in 66 countries worldwide.

Amongst those legislators and delegates from other UN and World bank agencies attending the GLOBE summit included members of both the Mexican and US senate's, the Assistant UN Secretary General Robert Orr and World Bank President Jim Yong Kim. The group discussed over 500 pieces of individual legislation to explore how and why climate legislation is being introduced around the world.

Amongst the findings of the Climate Legislation Study were the revelations that 66 countries around the world produce around 88 percent of the carbon emissions released around the world. Amongst those introducing the largest number of climate centered legislation were developing countries, aiming to create a larger, more profitable economy with reduced carbon emissions. In response to the initiatives introduced at a national level, GLOBE is looking to assist legislators from around the world in introducing carbon reducing legislation.

Awareness of the introduction of legislation at a national and international level was identified as a major stumbling block in countries around the world. An app available on Apple and Android powered devices has been launched by GLOBE that will allow the download of documents related to the state of the climate around the world. The first document made available for download is the 700 page Climate Legislation Study produced by GLOBE.