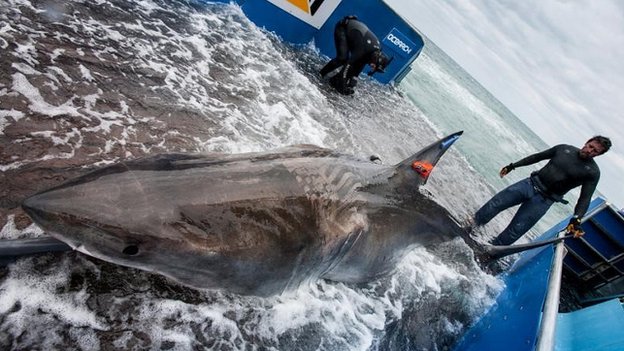 Lydia the Great White Shark on the Move Again

Mid-Atlantic Ridge - Lydia the female great white shark was captured and fitted with a GPS tracking device a year ago this month by the OCEARCH scientific project. Since that time, she has been followed avidly as part of an ongoing effort to study this species. Now, it is being reported that she is within 1,000 miles of the County Cork coastline in Ireland. To date, she's traveled 3,000 miles from her point of departure in Jacksonville, Florida. Her travels are significant because it marks the first time a great white has been tracked traversing the Atlantic Ocean.

Dr. Gregory Skomal of the Massachusetts Marine Fisheries says that Lydia has not yet reached the Mid-Atlantic ridge and until that happens, she cannot truly be said to have crossed the Atlantic. Once she does, she will make history for the first documented crossing of the Atlantic by a great white shark going from the East to the West. As far as her journey goes, she is halfway to towards the goal of crossing the Atlantic.

It was only this past October that Lydia was tracked in the waters of Placentia Bay in Newfoundland. Those waters rarely see a great white shark. Those interested in following Lydia's journey can do so directly from Ocearh's website. The objective of the OCEARCH project is to provide data on the migration patterns of great whites which has previously not been available. It is hoped the data will lead to both improved conservation efforts to protect the species and increase the safety of human beings.