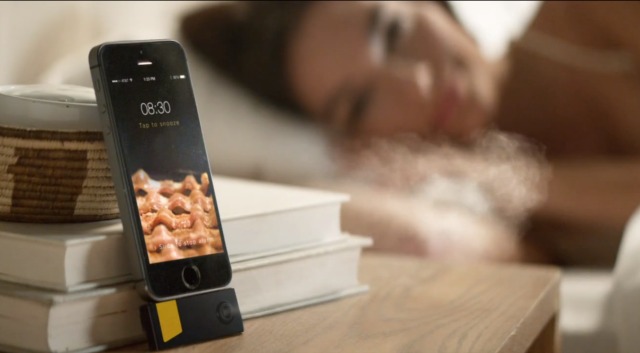 Oscar Mayer Launches Alarm App that Creates Bacon Smell[/caption]Apparently Oscar Mayer isn't only about meat products. The company announced on Wednesday that they have developed an alarm app to wake up users to both the sound of bacon sizzling and the smell of it as well.

Obviously, the app download is only capable of creating the bacon sizzling sound for the wakeup call. In order to get the bacon smell, a special dongle called the Wake Up and Smell the Bacon device can be obtained for qualified applicants. Oscar Mayer has no plans to market the odor emitting device.

Those interested in this novel device can go to the website wakeupandsmellthebacon.com and request one. For those who think the idea sounds frivolous, Oscar Mayer cites that fact that they are a big seller of bacon.

In fact, their Instagram hashtag "#bacon" boasts two million references. Also, Oscar Mayer has a proud tradition of promoting itself in eclectic fashion.

The most notable example has been the Oscar Mayer Weiner mobile which has been in operation touring American cities since 1936. The company also has the distinction of having the longest running commercial in history. So it is a good bet that with the "Wake and Smell the Bacon" device, users may be taking part in a historic event even if it is somewhat silly.

Wake up and smell the bacon with Oscar Mayer's new iOS app
http://www.businessinsider.com/oscar-mayers-bacon-scented-alarm-clock-2014-3

Wife exposes affair of husband and mistresses all over Walmart