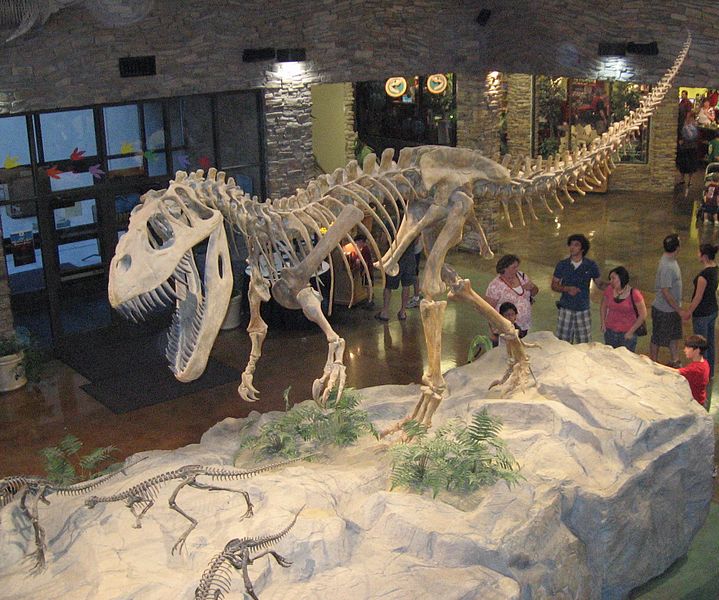 Torvosaurus (/?t?rv??s?r?s/) is a genus of carnivorous megalosaurid theropod dinosaurs that lived approximately 153 to 148 million years ago during the later part of the Jurassic Period in what is now Colorado and Portugal. It contains two currently recognized species, Torvosaurus tanneri and Torvosaurus gurneyi.[/caption]

Lisbon, Portugal - In this metropolis of three million people that forms the cultural center of this nation on the Iberian peninsula, archaeologists have discovered the remains of a dinosaur they call the Torvosaurus gurneyi. It is the largest carnivorous dinosaur known to have stepped foot on European soil at a towering 10 meters (33 ft.) replete with razor sharp 10 cm (~4 inch) teeth which were fashioned like blades.

Put another way, this beast had veritable saws inside its jaws. It weighed as much as 5 UK tons (11,200 lbs).

Its head measured end to end at 1.15 meters (3ft 9in). Put another way, its head was longer than half the body length of the average person.

Given that the dinosaur didn't possess great intellect, it was one mighty muscle head. It is believed to have lived 150 million years ago during the Jurassic Period.

This Torvosaurus has been classified as being different than the American and African counterparts and is believed to be related to Torvosaurus embryos also unearthed in Portugal. That conclusion was reached after a careful comparison of jaw bones, teeth count, shin bones, and the partial sample of the tail that was found.

Paleontologists also believe the Torvosaurus possessed protofeathers or pre-bird feathers. The findings were detailed in a report published in the open access peer-reviewed scientific journal called the Pubic Library of Science (PLOS) One.

Despite its massive size, the Torvosaurus was still smaller than the Carcharodontosaurus, Giganotosaurus from the Cretaceous period, and the Tyrannosaurus.