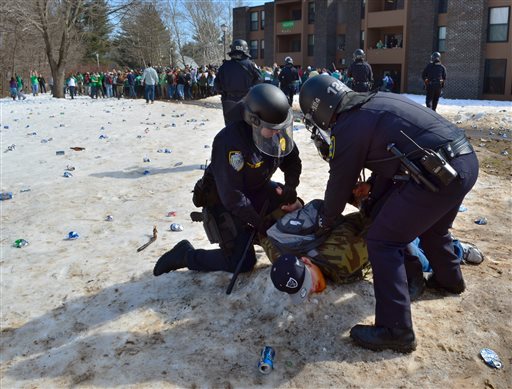 Amherst, Massachusetts - Not far from the campus of the prestigious University of Massachusetts (UMass), a celebration known as "Blarney Blowout" got out of hand bringing in riot police to quell the disturbance caused by thousands of drunken partygoers. The "Barney Blowout" is celebrated the Saturday ahead of spring break. Now, anytime a number of people gather together to drink alcohol, there will be revelry which is prone to get carried too far.

However, this time around it took riot police to break up the celebration with some people casting bottles at officers. In all, 73 people were arrested and four police officers were hurt. As if the local police department didn’t have anything better to do on a Saturday night and early Sunday morning, they spent many man hours responding to calls about drunkards fighting amongst each other or otherwise disturbing the peace with their alcohol impaired judgment.

Amherst Police Capt. Jennifer Gundersen did not have kind words to say about the event when addressing reporters about the revelry. She explained that she finds the concept of drinking alcohol all day long as unsafe for the public and for the partygoers. UMass officials denounced the activity and said they will review the case of each of the 73 people arrested against the code of conduct every student is required to sign. Those found in gross violation may be suspended or expelled. Local bars started the annual tradition as a means of cashing in on students before they leave campus for spring break.

CrossFit Sued for Denying a Transgender Woman her Civil Rights