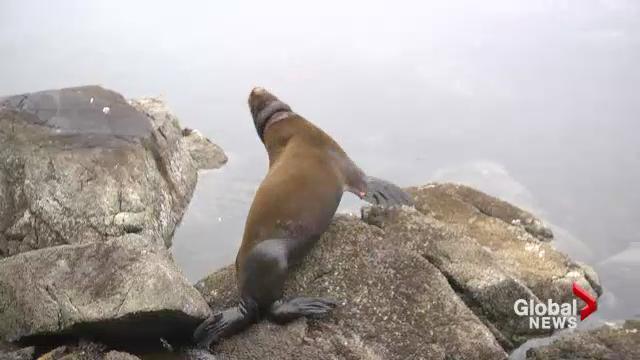 Fanny Bay, Vancouver Island - For the second time in six months sea lions have been ensnared in debris off this British Columbia island. The trouble is that disentangling a sea lion is no small undertaking. A sea lion can get itself tied up in the debris all on its own, but it requires the skill of a professional to free it. For starters, the sea lion must be sedated with tranquilizers. Then and only then can the debris be removed. Quite likely the sea lion will require care to dress any wounds.

This past October two sea lions get caught and last month another one was spotted by locals. However, getting a qualified expert to this island takes time and the sea lion has had to endure on its own since February 21. The team working on one of the tangled sea lions. Credit: Vancouver Aquarium[/caption]

According to Lisa Spavens, who works for the Department of Fisheries and Oceans, a team of qualified pros will be able to free the sea lion, nicknamed Kiyo, by next week. Spavens said the exact location of sea lion makes the rescue that much harder. This necessitated a carefully laid out plan to extricate the mammal to safety.

Photographs show Kiyo with wire wound around its neck. The images have evoked sympathy from the public which is demanding action. However, as Spavens stated, it isn't an easy task to rescue Kiyo. For now, the public will have to endure the painful images of the suffering sea lion. The public is being asked not to attempt any rescue of their own. One of the sea lions. Credit: Vancouver Aquarium[/caption]