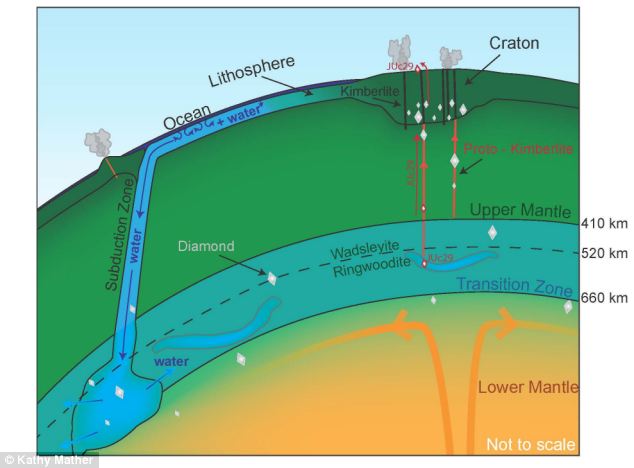 The $20 diamond that led to the discovery: Diamond sample JUc29, from Juina, Brazil, containing the hydrous ringwoodite inclusion. The rough diamond has been naturally sculptured to its unusual shape by corrosive mantle fluids during transport to the surface.
[/caption]Juína region, Brazil - A tiny diamond purchased in his Central-Western region of Brazil back in 2008 is providing a wealth of information.

The diamond itself is said to have zero commercial worth. However, that is not technically true.

The team of scientists that purchased it paid $20.00 for it. However, what the small brownish colored and very unattractive diamond is revealing is worth far more than would have been imagined.

The stone weighing only 0.1 grams consists of various substances such as the mineral peridot and water. This substance is believed to exist a layer of the earth that is 410 to 660 kilometers (255 to 410 miles) deep.

This area stands between the upper and lower mantle of the earth. Diamonds produced in this area are known as ultradeep diamonds. Needless to say, they are quite rare.

The fact that a substance believed to exist in large quantities deep inside the earth also contained water has led a team of scientist to conclude there may well be a vast water reserve deep inside the planet. At least there has to be sufficient water to cause the formation of a high pressure stone containing 1.5% water. T

he specific type of peridot found is called ringwoodite. It marks the first time this has been found on earth other than from meteorites. Schematic partial cross section of the Earth showing the location of ringwoodite, which make up approximately 60% by volume of this part of the transition zone. The diamond containing the water-bearing ringwoodite inclusion found by originated from approximately 500 km beneath the Earth's surface, where a large mass of water may accumulate by the subduction and recycling of oceanic lithosphere, into the transition zone. [/caption]