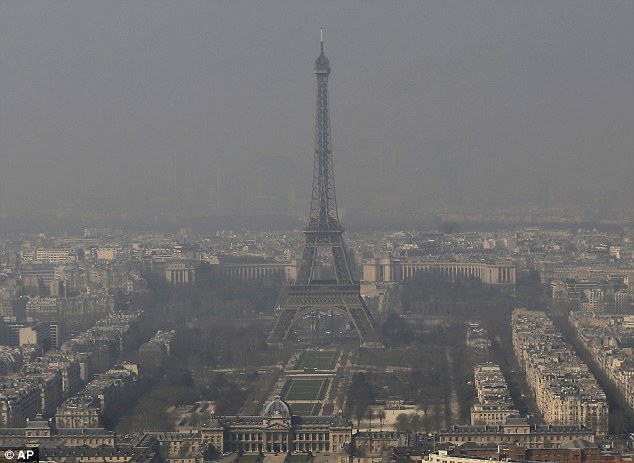 The Eiffel Tower, is barely seen through the smog from Paris. Drivers in Paris will only be allowed to use their cars every other day from tomorrow because of dangerous pollution levels
[/caption]Record high pollution levels in the City of Lights has prompted officials in Paris to begin enacting a ban on car traffic in the region. Law enforcement officials will only allow those whose vehicles have odd-numbered registration plates to be out on the roads in Paris on Monday. If the ban is extended into Tuesday, only drivers with cars having even-numbered registration plates can drive on Parisian roadways.

Officials took the drastic measure after pollution levels throughout Paris were at higher than normal levels for five consecutive days last week. Normally, air pollution eventually dissipates in the evening but recent weather conditions combining warm days coupled with very cold nights, have helped to keep the pollution in place.

A ban to reduce city traffic as a means of dealing with increasing air pollution has been put into effect only once before, 17 years ago. In addition to regular passenger cars, the ban also affects motorcycles. The only drivers who might enjoy an exception are those driving electric cars and hybrid vehicles, as well as vehicles transporting three or more passengers.

As an added incentive for Parisians to abandon their cars, fees on public transportation have also been waived through Monday. Paris has been recording the worst pollution levels of any major city in the world in recent years. It is ranked second only to Beijing, China, as one of the most polluted metropolitan areas in the world. Everyone is hoping for a heavy downpour to help cleanse the air.

Nigerians Job Stampedes Ends With 16 Dead Many More In Hospital