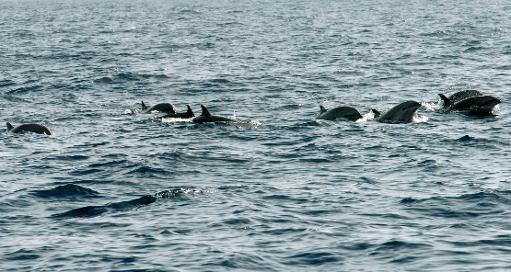 Some 30 white-beaked dolphins have died after being trapped in ice off the coast of Canada's easternmost Newfoundland province, and three remaining alive are not faring well, officials said (AFP/File, Jay Directo)
[/caption]Calf Among 30 Dolphins Who Died in Canadian Ice

Sounding like a child crying, the calf was one of approximately 30 white-beaked dolphins who died after bravely trying to escape when trapped in broken and jagged chunks of pack ice, according to the mammal rescue group, Whale Release and Strandings. This tragedy occurred off the southwest coast of Newfoundland in Canada.

An alert resident of Cape Ray, Bert Osmond, posted videos and pictures on his Facebook page showing the animals' struggle with the ice in the blood-soaked water. He lamented that there was nothing but ice for miles, and there just wasn't any way to help them.

The dolphins put up a brave struggle throughout the weekend to stay alive and free themselves from the ice that hugged the shores of Cape Ray. As the ice crushed in around them and water boiled up as they tried to escape, they would have struggled for air, would then become exhausted, and would eventually drown. Larry Vaters, a Fisheries and Oceans spokesman, said that the cause of death was likely the result of suffocation from the ice cover along with internal body injuries.

Canadian fisheries officials twice visited the area, but they were helpless because there was little they could do to break the ice apart.

The three dolphins that remained alive after that ordeal were not expected to survive considering the high winds, the heavy ice, and frigid temperatures that dipped to a minus 10 degrees.