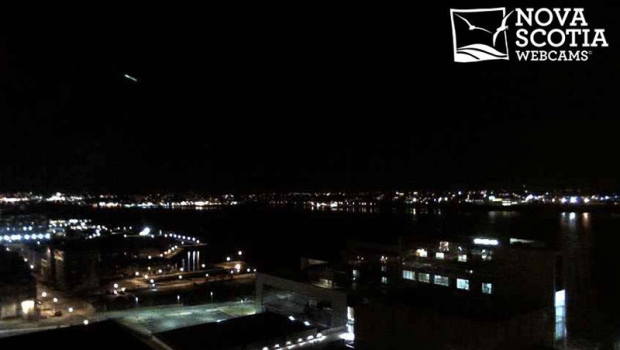 A fireball has hit another part of Canada just one day after one was seen in the Maritimes. Several witnesses described the new fireball in different ways. One thing is for sure; they all saw something. The first witness to Wednesday’s fireball over Nova Scotia said that it made a long entry before disappearing into the horizon. He saw the light while out for a morning run.

The second witness said that the fireball lasted for approximately seven seconds. He told reporters that it broke up into several different pieces before disappearing. Stephen Lukas told reporters that he has seen shooting stars before and this was nothing like that. He said he sees the shooting stars approximately once a month and is well aware of what they look like.

A third witness, Nigel Service, said that he saw a small white light. He did not pay heed to it at first because he thought it was part of the new city lights that were recently installed in the area. He insists that the lights were not from the International Space Station as some people believed of the Tuesday lights seen in Maritimes. What he saw was akin to the ones seen that night. Service lost sight of the light for a short period of time; however, he caught it again. He said it began to get larger as it moved towards the harbor.

David Lane is an astronomer who states that witness descriptions make him believe that it was either an extra bright meteor that went across the sky or an actual fireball. A meteor is a piece of rock that gets in the way of the earth and ultimately burns up. Witnesses said that the ball appeared to be a colorful flame. The sightings from both Nova Scotia and Maritimes were witnessed at approximately 5 a.m. Local officials have not released any statements on the situation so far.

A Halifax webcam captured a bright light shooting across the sky at 5:17 a.m. on Wednesday, March 19, 2014. (Nova Scotia Webcams) [/caption]