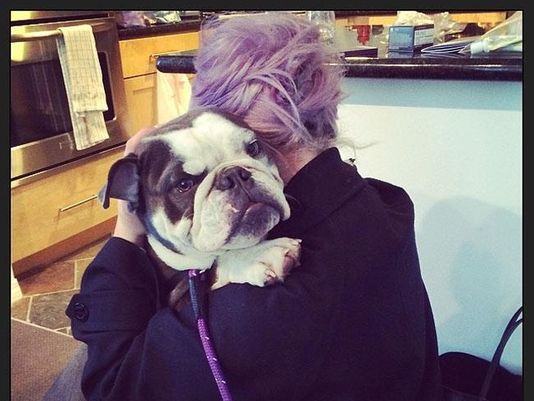 Kelly Osbourne, host of "Fashion Police", reports that her pet Bulldog, Willy, is a real lifesaver. Kelly told fans via a post on her Instagram account that she and her dog were out for a walk in Beverly Hills when Willy suddenly pulled her away from the path of an oncoming automobile. But she reports that her protective canine best friend didn't stop there. Willy also jumped on top of Kelly to ensure that nothing could harm her. Her Instagram post shows Kelly giving her savior an affectionate hug.

“My dog just saved my life… we just went for a walk and I fell because Willy pulled me back from getting hit by a car!!!! Then he jumped on top of me to protect me! What a hero!”

29-year old Kelly has been a lifelong animal lover, but she has had several tragedies in the recent past regarding her pets. Four years ago, a puppy she owned by the name of Woody passed away unexpectedly. Then in 2011, she had to make the heartbreaking decision to euthanize her Pomeranian dog, Noodles, because of an incurable brain tumor. Last spring, the Osbourne clan lost its family mascot, Maggie. So Kelly is incredibly grateful and relieved that the most recent episode involving her Bulldog, Willy, had such a happy ending. Willy has been Kelly's best friend and companion since she ended her engagement to fiancé Matthew Mosshart in early 2014.

On The Web:
Kelly Osbourne’s Dog Saves Her From a Car Accident
http://www.intouchweekly.com/posts/kelly-osbourne-s-dog-saves-her-from-a-car-accident-36329

Related Topics:Kelly Osbourne saved by dog
Up Next

Giuliana Rancic says Russell Crowe was her most awkward interviewee ever