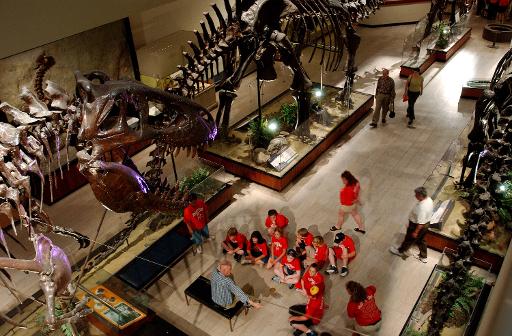 File picture fo illustration shows visitors at a dinosaur display room at the Carnegie Museum of Natural History in Pittsburgh, Pennsylvania, on May 13, 2004 (Getty/AFP/File, Jeff Swensen)
[/caption]Imagine the terror of being chased by a giant chicken bent on having you for a snack. That’s one scene missing from all three of the Jurassic Park movies. This cretaceous age beast terrorized the earth 66 million years ago and was pieced together over the last two decades.

This 500 pound, prehistoric biped was 10 feet tall and 11 feet long with a bony comb on top of its head. Similar in appearance to a modern day cassowary, found in Australia, it has a toothless beak, long legs, enormous feet and talons on the ends of its arms in place of wings.

This new species of dinosaur was discovered when paleontologists pieced together fossilized bones that were discovered in the Dakotas in the 1990s. The species was tagged with the name Anzu wyliei, and the “chicken from hell,” which according to Matt Lamanna, the lead scientist who discovered the creature, said was "as close as you can get to a bird without being a bird (Lamanna, 2014)," is one of the largest such dinosaurs ever found.

There were enough pieces excavated from the Hell Creek formation of North and South Dakota to assemble most of an entire skeleton of the prehistoric pullet which was found along with two other partial skeletons. "Not only can we characterize a whole new species," he (Lamanna), said, "we can characterize a whole group that has remained a huge mystery (Dell'Amore, 2014)." The mystery had endured do to the fact that before this discovery, oviraptorosaurs had only been found on the Asian continent.

Besides the emergence of a new terrifying image, Anzu wyliei has paleontologists crowing about its discovery across the globe. Perhaps the new “Chicken from Hell” will be featured in the release of “Jurassic World.”