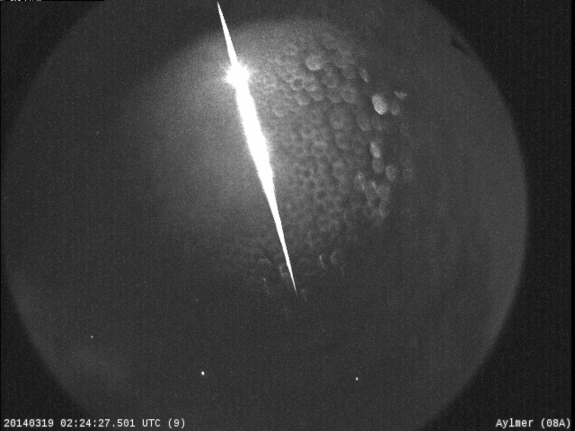 Canadian researchers are seeking the meteorite that caused this fireball over southwestern Ontario on March 18, 2014.
Credit: University of Western Ontari[/caption]From Meteoroid to Meteor to Meteorite - Scientists Hunt for Earth's Clues in the Falling Space Debris

London, Ontario - A joint effort between the Southern Ontario Meteor Network (SOM) and the University of Western Ontario recently spotted a meteor as it streaked through the skies over the southern city of Selwyn. Meteors are tracked in this region using a mix radar devices, cameras, and special audio equipment to pick up the shock-waves the meteors generate. The equipment gives scientists the location where the meteor ceased to glow white and often times that's good enough to know the general vicinity where possible debris might be found.

Meteorite debris is more than a novel fixation for researchers. It offers insights into the origins of the universe. As it turns out meteorite rocks fall into a few varieties. The first and by far most ordinary type are made of minerals known as silicate. This types of rocks are called stony meteorites. For every 10 meteorite stones found, 9 will be of this sort. The other type of meteorite is made mostly of iron. Others are a mix of silicate and iron. These are the rarer types. The iron ones are generally believed to have been part of asteroids or the core of celestial bodies from now extinct moons or planets.

Most of the rocks come from the beltway between Mars and Venus which is a sort of trash bin for debris which isn't pulled into the gravitational orbits of a larger body. When one of these rocks gets pulled towards earth it is called a meteoroid. As soon as it strikes atmo it glows white from the friction and is called a meteor. Meteorite is the term is gets when it busts up either from the heat or upon impact. Most but not all meteorite rock is magnetic. They also have glassy look and black color due to the heating process they undergo as they strike atmo.

3D Dna The Wave Of The Future?